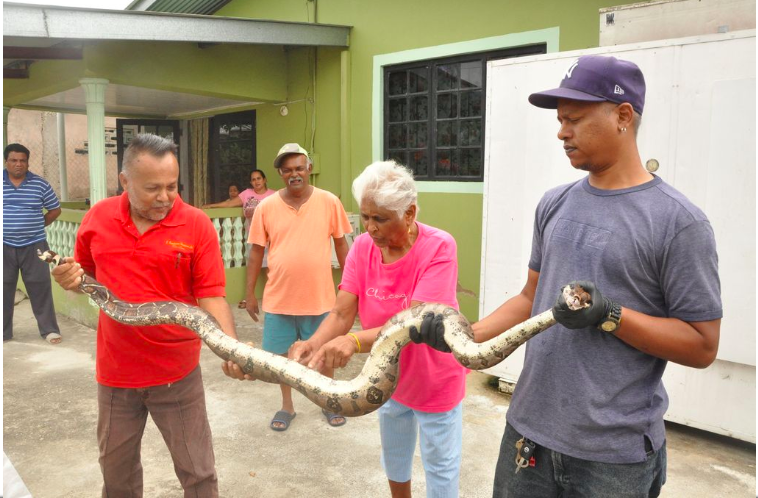 A snake thought to be a stuffed animal made its way into the bathtub of a Rousillac resident’s house.

Polly Boodoo, 78, and her daughter Savitri made the alarming discovery after returning home on Wednesday morning. While Savitri alerted neighbours of the macajuel’s presence, her mother thought the reptile might have been Lord Shi­va, a Hin­du de­ity with a snake around his neck.

The snake was eventually caught by Game Warden 2 Andy Singh and his col­leagues Je­re­my Din­di­al and Bisham Mad­hu. Singh said within the last eight years, they have been getting calls about large snakes appearing on residents of Rousillac’s compounds. He said this was as a result of the deforestation taking place from San Fernando to Point Fortin, which is the snakes’ habitat. He added that because of the heavy rainfall and the resulting floods, the snakes have been forced to seek shelter elsewhere.

Singh and his team released the sev­en and a half feet, 70-pound snake into the south­ern wa­ter­shed game sanc­tu­ary be­tween Quinam and Mon Di­a­blo beach­es.

Ministry Of Trade Moves To Revitalise Yachting Industry Through Incentives 0