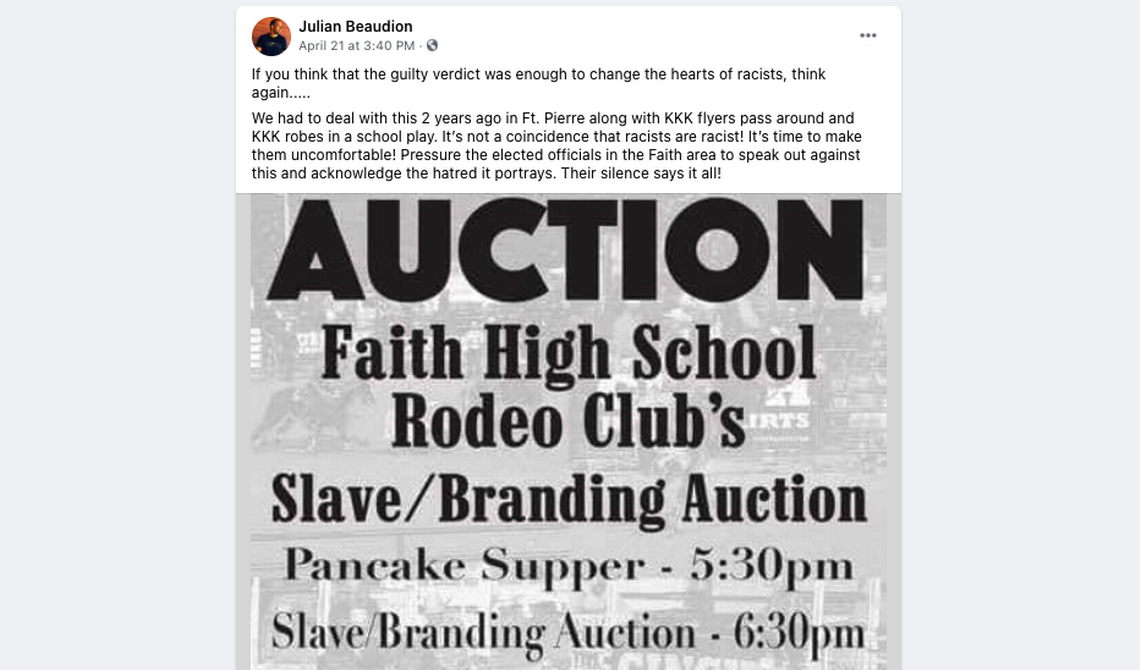 A South Dakota high school rodeo club has decided not to continue with its decades-old “Slave/Branding Auction” fundraiser.

The annual event, scheduled to take place Monday at Legion Hall, included a pancake dinner and a chance to bid on pies and “slaves.” The Rodeo Club members offered up a few days of labor to a local rancher in exchange for a donation. The auction was the club’s main fundraiser and provided scholarships for other events.

The Legion Hall host, Glenda McGinnis, said she received dozens of people from all over the country asking “how such a racist and hurtful name could be used in 2021.”

“I thought it was a joke. We have the event every year for about 40 years now,” McGinnis said. “I even got a call from a local cowboy who said: ‘How’s this going down? It’s not right.’ I told him we weren’t doing anything wrong. And he explained, ‘Well, it’s how it was advertised that’s wrong.’”

“I didn’t even think of ‘slavery’ in racist terms. It’s just kids work for free to raise money for their club. Now I see; this is a very bad choice of words. But I’m naive enough, I guess,” she added. McGinnis said the club’s adviser called her Wednesday and canceled the event.

Many in the area are stunned it was happening at all, especially at a time when most Americans are confronting police brutality and systemic racism. State Rep. Linda Duba said the club had a chance to change the event’s name and still have it.

“Instead, they displayed a tone-deafness that is inexcusable,” Duba told the outlet. “We are better than this.”

School district officials said the event was not school-sanctioned and provided no other comment.

Republican Sen. Ryan Maher said he grew up with the phrase being used and kids’ labor being exchanged for donations of about $300 to $400 from ranchers. He called the attention the event received “absolutely crazy” and said he didn’t find the term “slave auction” offensive. Instead, he stressed the event was supposed to be fun.

“This is western South Dakota. Most people don’t even know we are here; they need to get off their high horse and let these kids be kids and do their own thing,” he said. “Most importantly, mind their own business. We have our culture, and you have yours. If you don’t like ours, don’t move here and don’t come out here.”

Moonilal accuses PM of spying; says UNC was not involved in Tobago election 0