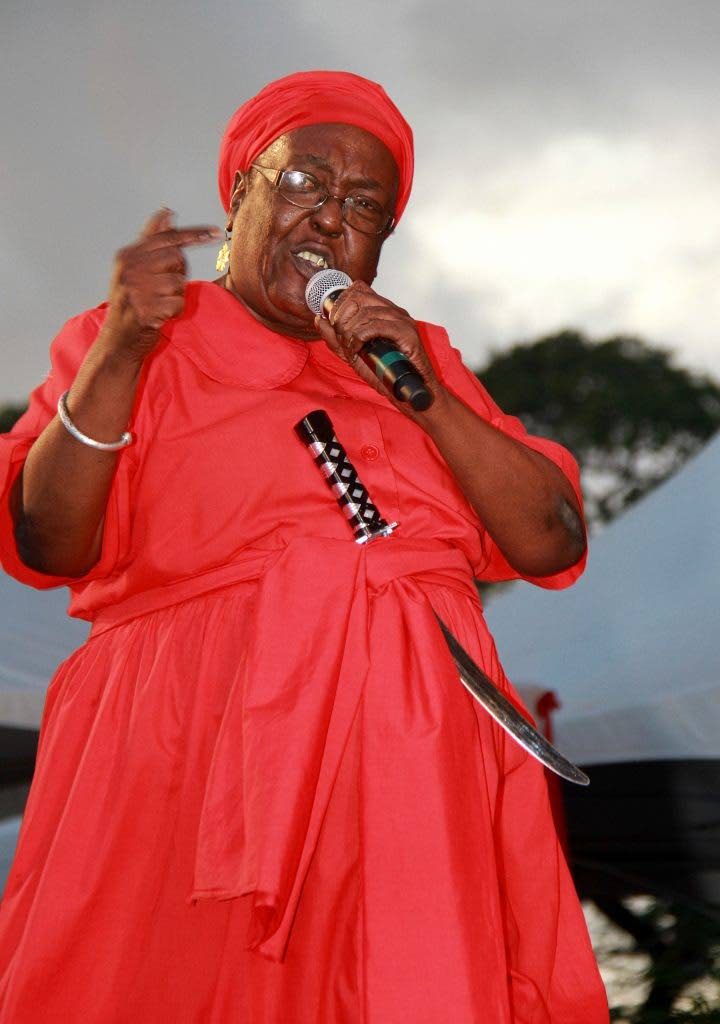 Former Calypso Monarch Singing Sandra died early this morning at Mt Hope. She had been receiving treatment for an unknown ailment.
More as info comes to hand.

She was baptized in spiritual Baptist church when she was fifteen years old and during her later stage of her life she became a practicing orisha.

From an early age, she sang and acted as a child, and performed various small productions named ‘Best Village’ productions. She was rebellious and barely attended school, because she was looking to work to make money. As a result, she worked in various low-income jobs and continued doing so till her twenty’s and Singing Sandra never finished school. Yet in her mid 20s she was approached in 1984 by calypsonian Dr. Zhivago to perform two of his songs, and the following year was recruited to Mighty Sparrow’s Youth Brigade tent at the carnival.

Her exceptional talent and persistence in hard work and in music resulted in her winning the National Calypso Queen in 1987.From that moment and after, her career accelerated at an exponential rate. She went on to win the Carifesta Monarch and Calypso Queen of the World titles in 1992 and she performed at the Reggae Sunsplash festival in 1992.

Later, she formed the group United Sisters along with Lady B, Tigress, and Marvellous Marva, yet she continued to perform as a solo artist and consequently won the ‘Best Nation Building Song’ award, along with a $5,000 prize, at the 1997 carnival for the song “One Destiny One Heart”.

As a result of her career as an artist, she is a well-respected musician of soca. Her achievements were numerous. She was the second woman to win Trinidad’s Calypso Monarch title, winning in 1999 with the songs “Song for Healing” and “Voices from the Ghetto”. She was able to finish in third place in 2000 and in fifth place during 2001’s festival. In 2003 she won the title for a second time, with “For Whom the Bell Tolls” and “Ancient Rhythm”, winning a Honda Civic car and a $70,000 cash prize, becoming the first female calypsonian to win the title twice. She placed third in 2005 and second in 2006

Loading...
Newer Post
PNM Tobago leader denies reaching out to PDP; agrees with calls for fresh election
Older Post
Ramesh: Only an election do over could fix the current impasse in Tobago