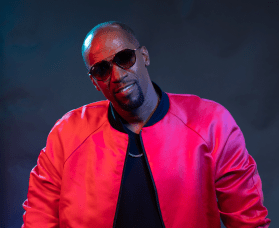 Local entertainer Shurwayne Winchester, who is an avid lover of the Christmas season, has stated that Covid 19 must not stop the upcoming season of giving, and as such, he is giving the public a brand new single .

“Love and light, peace and giving must push through and I’m ready to make that abundantly clear,” said Shurwayne on Tuesday night as he put the final touches on a song that’s just perfect for the season ahead.

The track, a melodic, vibe-filled Soca parang anthem, was collaboratively written by Preacher and Shurwayne and was released on Wednesday to mark the beginning of the 100-day countdown to Christmas.

It’s called, “Leave The Drinks By The Gate”- a call to action that’s guaranteed to catch on quickly.

Shurwayne said: “Trinidad and Tobago is a special place when it comes to Christmas. This is traditionally a time for family gatherings and while we may not be able to mingle with each other as we usually would, we can still sing the music, smile and with a bit of physical distancing, we may still even be able to take a drink at a neighbour’s doorstep.”

Endorsing all public health directives, Shurwayne says this song is meant to bring a bit of much needed cheer to the people of T&T and the Caribbean by extension, while still promoting safety. “People from all walks of life are being affected by this virus. Many are experiencing depression and anxiety. This is just a personal effort to bring back those smiles and also to let my people know that where there is love, there is hope. Love lives in our Caribbean music and so, this is love from my lips to their ears,” he said.

“Leave The Drinks By The Gate’, like all of Shurwayne’s music, is being globally distributed, and available for streaming via globally recognized streaming platforms. “I just really want to thank everyone who has supported me, for the love they’ve shown over the years. I want to let them all know that I believe in their resilience and we’ll get through this together,” said Shurwayne.

The song’s lyric video has been done in Karoake style and is being released simultaneously with the song’s release. Shurwayne says he wants to encourage everyone to just sing along.

Weather Alert In Effect Until Saturday 0