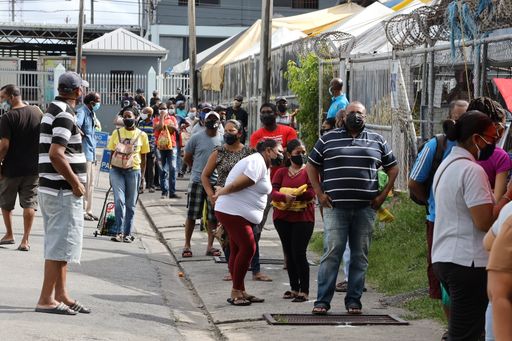 Shoppers at Marabella market told to spread out, shop fast and leave

In a bid to avoid the constant long lines and overcrowding at the Marabella Market on Sundays, San Fernando Mayor, Junia Regrello, is urging shoppers to walk with a list, shop fast and leave.

He also said there will be a greater police presence at the market this Sunday and police officers both from the police service and municipal police will be telling shoppers, who are observed lingering, to leave.

Mayor Regrello said the market is open from Sunday to Friday, with Saturdays being reserved for vendors at the Mucurapo Street market.

He said the same vendors are there daily and he is encouraging shoppers to shop on an alternative day to Sunday.

Following a meeting with the San Fernando City Corporation on Wednesday, he said it was observed that people tend to crowd the southern section where they believe the bargains are better and linger longer avoiding the northern vendors.
However, he urged those shoppers, “Spread out on the northern side, shop faster and leave.”

He said “We are encouraging people to shop faster and move out. Walk with a shopping list, grab what you want quickly and leave so as not to crowd the market.”

He said this is a serious time and the Government was doing all it can to flatten the pandemic curve, but if people continue to disregard the protocols “the situation will only get worse.”

The Mayor also pointed out that an additional gate will be placed on the eastern side of the market “So, there will be three entry points and two exits which we hope will make things a little easier.