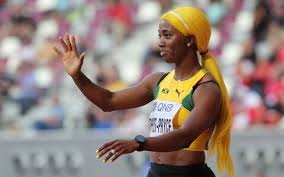 Shelly Ann Fraser- Pryce skips out on 200M; says she was pulled by her coach

World 100 metres champion Shelly-Ann Fraser-Pryce clarified the decision to skip the 200m event at the World Championships in Doha and confirmed she will be competing in both events next season.

Fraser-Pryce told reporters, shortly after winning the 100m title inside the Khalifa International Stadium on Sunday, that she had been pulled from the half-lap event by her coach Stephen Francis.

The Jamaican, who has an Olympic silver and a World Championships gold in the 200m, however, made it clear that the decision to withdraw from the event was a precautionary one, given the length of the season and the fact that she is still working her way back after giving birth two years ago.
She has now been declared the fastest woman in the world!

Call Made For Labour Reform 0