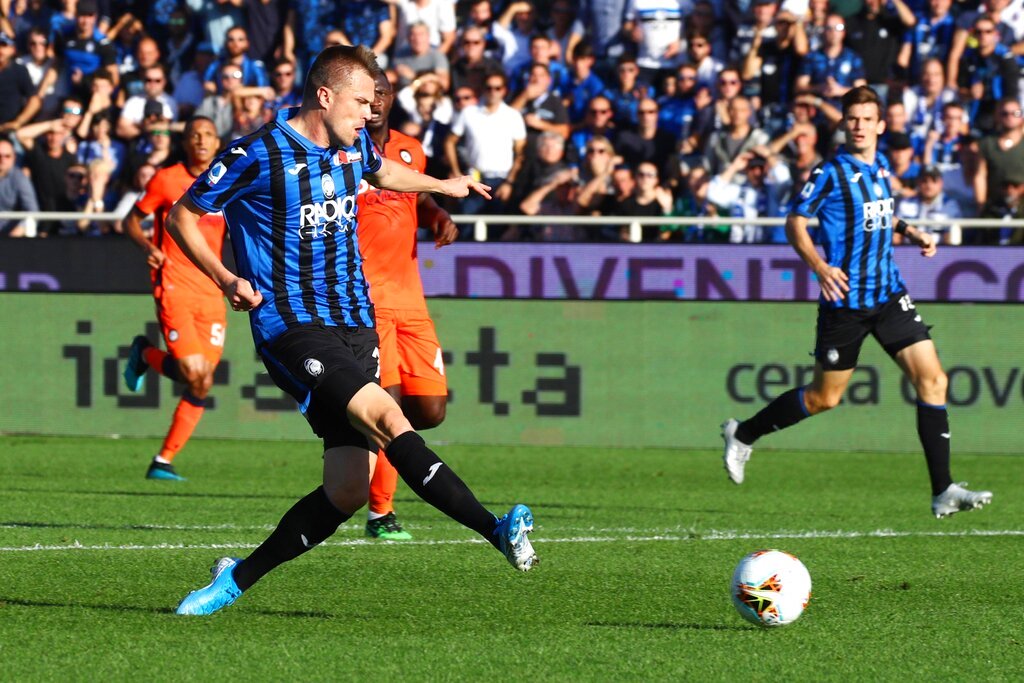 Seven-goal Atalanta Run Riot to Close in on Juventus

Luis Muriel hit a hat-trick as Atalanta put their midweek Champions League humiliation behind them with a crushing 7-1 win over 10-man Udinese that moved them to within three points of Series A leaders Juventus.

Gian Piero Gasperini’s side consolidated third place with 20 points from nine games, two adrift of second-placed Inter Milan and three ahead of Napoli, who were held 1-1 at lowly SPAL.

Defending champions Juve stay top despite drawing 1-1 at Lecce on Saturday thanks to Antonio Conte’s Inter also collecting just a point with their 2-2 draw with Parma.

Gasperini said his side, top scorers with a Serie A-record 28 goals after nine games, had felt bitterness after their 5-1 humbling at Manchester City, their third Champions League defeat in as many games.

“We’re trying to use the Champions League to gain experience and it helps us become better in Serie A, to fight back from difficult situations, like when we went behind today,” said Gasperini.

“We’re not deluding ourselves. It is very early days, only nine rounds,” he continued.

“The Scudetto is Juventus’ to lose, then there are Inter and Napoli as well as other teams that have important possibilities.”

After falling behind after 12 minutes following Stefano Okaka’s first away goal for Udinese this season, the Bergamo side got into their stride.

Slovenian Josip Ilicic picked up a Marten De Roon cross to grab the equalizer after 21 minutes, and it was all one-way traffic after Udinese’s Nicholas Opoku was sent off after picking up a second yellow card for bringing down Ilicic.

Muriel converted from the spot for the first of his treble, which included two penalties, with Slovenian Ilicic completing a first-half brace.

Mario Pasalic also got on the scoresheet and 17-year-old Ivorian forward Amad Diallo Traore completed the rout to score on his debut seven minutes from the whistle.

Udinese, meanwhile, is 13th but just three points away from the drop zone.

Atalanta next travel to Napoli’s San Paolo Stadium on Wednesday after Carlo Ancelotti’s side were held to their second stalemate in three Serie A games.

After winning 3-2 a European thriller in Salzburg, Arkadiusz Milik put Napoli ahead after nine minutes.

But their advantage was cancelled out seven minutes later by SPAL’s Jasmin Kurtic.

Napoli also had a penalty awarded before the break for a Francesco Vicari handball only to see it overturned after a VAR viewing.

“Even Juve and Inter, with yesterday’s draws, lost an opportunity. Everyone in the week is paying for something in the Champions League.”

Surprise package Cagliari are seventh after a 1-1 draw against midtable Torino, who stretched their winless run to four games.

Claudio Ranieri fell to his first defeat as coach of rock bottom Sampdoria, losing 2-1 to Bologna.