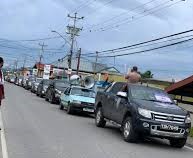 The Scrap Iron Dealers Association will hold a motorcade next Wednesday at 9am from the Brian Lara Stadium in Tarouba to Port of Spain.

It is being held to show the association’s opposition to the six month ban by the ruling administration on export from the industry.

President of the Association, Allan Ferguson, claims that in spite of incidents of the theft of copper and cable this should not be used as a basis to affect the operations of legitimate members. This as the Government insists the move is necessary to restore order to the sector.

The Association also says efforts will begin to regulate the industry and put in place revised legislation.

Mr Ferguson speaking at a news briefing on Wednesday appealed for support from civil society and called for a meeting with Prime Minister, Dr Keith Rowley and Chairman of the Sub Committee to review the industry.