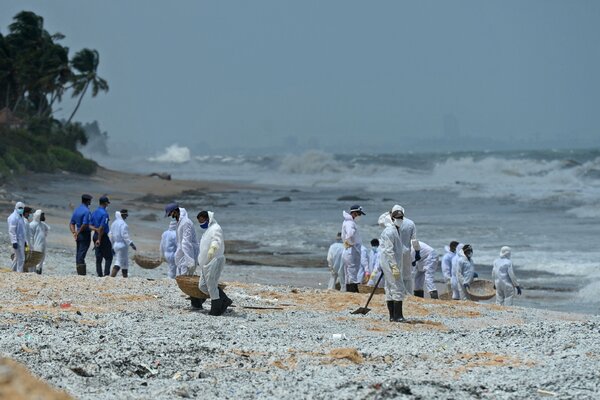 Hundreds of dead sea animals have washed up in Sri Lanka, weeks after a cargo ship carrying dangerous chemicals caught fire and sank.

The X-Press Pearl sank in early June off the coast of Colombo after it had been on fire for days.

The remains of 176 turtles, 20 dolphins and four whales have washed ashore since, a court has heard.

Experts fear the ship, which carried tonnes of oil in its tanks, will remain an environmental hazard for decades.

The X-Press Pearl had had been carrying 278 tonnes of bunker fuel oil and 50 tonnes of gas oil when it caught fire on 20 May. It was also carrying 25 tonnes nitric acid, along with other chemicals and cosmetics.

One environmental group had earlier said the ship’s toxic cargo threatened to create “a chemical soup” in the area.

A government minister said it was uncommon for animal deaths to be high at this time of year.

“During the south-western monsoon season, sea creatures never die in this way,” Environment Minister Mahinda Amaraweera told reporters, according to a Reuters report.

“Most of these carcasses are found on the west coast directly affected by the shipwreck.”

Moonilal believes parliamentarians may transmit COVID in a greater frequency 0