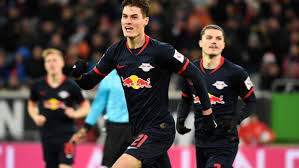 Patrik Schick snatched a draw for RB Leipzig in a pulsating 3-3 draw at title rivals Borussia Dortmund on Tuesday that moved them three points clear at the top of the Bundesliga.

Timo Werner also struck twice as Leipzig twice came from behind twice in the second half in a fiery encounter played out in torrential rain at Signal Iduna Park.

The draw means third-placed Dortmund missed the chance to move second ahead of Borussia Moechengladbach, who can join Leipzig on 34 points with a win over bottom side Paderborn on Wednesday.

“The game opened up after the break and we played with more courage and emotion,” said Leipzig coach Julian Nagelsmann.

“In the future, we need to make sure that we play like that from the beginning of big games like this.

“It was a lucky point for us. Dortmund could have defeated us, but they didn’t.”

While Dortmund at times showed a level of skill and quality to worry their upcoming Champions League opponent Paris Saint-Germain, at other times they showed clear signs of the mental frailty and defensive softness that has come to define their season.

Dortmund dominated the opening period, with Leipzig lucky to be behind by only two at the break.

Julian Weigl opened the scoring in the 23rd minute with a screamer from outside the box that completely bamboozled Leipzig keeper Peter Gulacsi with its power and flight.

Leipzig only needed seven minutes after halftime to bring the score back to 2-2, with Timo Werner gifted two goals through unforgivable errors from keeper Roman Burki and Brandt respectively.

The two goals were Werner’s 17th and 18th of the season and were two of the easiest the German striker will ever score.

Dortmund were back ahead just two minutes later when Marco Reus found Jadon Sancho unmarked in the penalty box, and the England international shoved his shot past Gulacsi.

However Schick pounced 12 minutes before the end, capitalising on Burki rushing out of his goal to hammer the ball home from close range and ensure the draw.

Idi Stuart apologises to membership for comment to the Express 0

No direct to link with AstraZeneca vaccine and blood clots 0