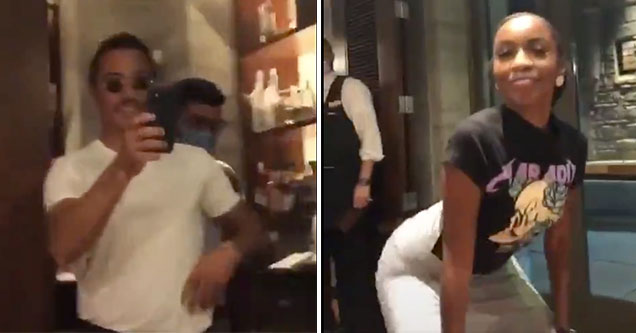 Instagram sensation and Chef, Salt Bae had the ‘gram lit over the last week, as people packed out his Boston steakhouse, but it looks like the party is over, as city officials have reportedly shut the restaurant down for violating social distancing guidelines.

The city ordered the steakhouse to close Saturday after receiving multiple complaints about the lack of social distancing and people not wearing masks, beginning opening night on Sept. 18.

Inspectors from the city’s Licensing Board observed long lines of customers who were not social distancing on multiple occasions.

Various videos from the restaurant have surfaced online, showing customers gathered in large groups and there was not a mask in sight! There is also a video of a young lady twerking for Salt Bae in his restaurant, as he records in the background.

Meanwhile the girl’s boyfriend clearly wasn’t having it, though, as he busted through the doors and she quickly ran out of the restaurant.

The video, which now has over 3.5 million views on TikTok, got fans of Salt Bae talking, and questioning the safety of the restaurant.