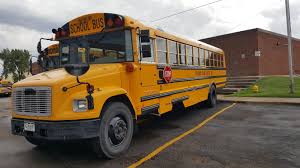 President of the Maxi Taxi Concessionaires Rodney Ramlogan said while some drivers have been given salaries, the finances has done little to relieve their financial burden.

Ramlogan spoke to News Power Now on behalf of the school drivers who have taken protest action, as a result of non-payment of their salaries.

Ramlogan said at this time, drivers are mindful that students are engaged in exams and as such today about 80% of drivers went back on the road. He said for this reason he pleaded with drivers yesterday not to engage in continued protest action as it would negatively impact those children.

Ramlogan also explained that every year the drivers face the same issue of non-payment of salaries even with the previous administration and this continues to be a source of frustration.

He also took issue with comments by the Education Minister yesterday, suggesting that the Ministry was being blackmailed by the maxi taxi drivers.

Ramlogan said nothing could be further from the truth, if anything the drivers were simply asking for what they had worked hard for.