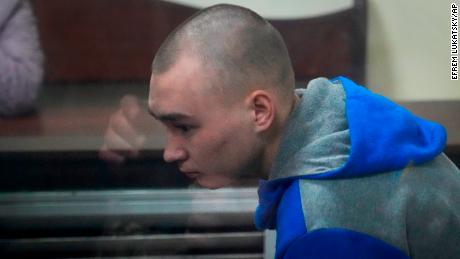 The war crimes trial of a 21-year-old Russian soldier has been adjourned until Thursday because too many members of the media were crowding the courtroom in Kyiv.

Vadim Shishimarin appeared before the first war crimes trial since Russia invaded Ukraine back in February. He is accused of killing an unarmed 62-year-old civilian man in Ukraine’s Sumy region, according to the country’s prosecutor general’s office.

Shishimarin said “fully” guilty when asked how he pleaded. The Russian soldier appeared in a glass box in the packed court room at Kyiv courthouse, faced with dozens of cameras. He declined to speak when he was asked by the court.

Shishimarin, wearing a blue-gray top with a shaved head, was seen listening to his Ukrainian-Russian interpreter as he was read the charges. His defense lawyer Viktor Ovsyannikov sat on the same bench as the interpreter.

The victim’s family was also in courtroom and was due to testify.

Russia said it still has no details about Shishimarin’s case in Ukraine, and it considers the charges “unacceptable,” “outrageous” and “staged,” according to Kremlin spokesman Dmitry Peskov.