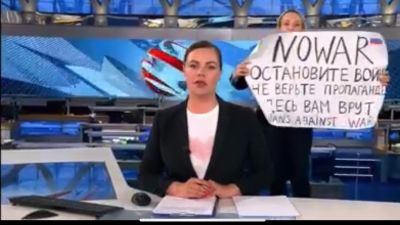 A Russian journalist has been fined and released after she protested against the war in Ukraine on a live TV news programme and made an anti-war video.

Marina Ovsyannikova, an editor at state-controlled Channel 1, was detained after she ran on to the set on Monday holding a sign saying “no war”.

According to the BBC, she said she had been questioned for 14 hours and not slept for two days, and was not given access to legal help.

She had pleaded not guilty to the charge of organising an unauthorised public event.

She also stressed that she came up with the idea of the protest alone.

It is not clear if she will face separate charges relating to her protest on live TV, and there had been fears she would be prosecuted under a more serious, new criminal law that bans calling Russia’s military action in Ukraine an “invasion” or spreading “fake news” about the conflict.