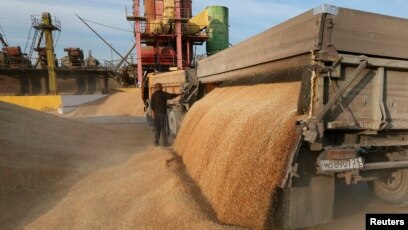 European Union foreign policy chief Josep Borrell has called the Russian blockade of Ukrainian grain exports a “real war crime,” adding that the bloc’s sanctions on Russia have played no part in the global food crisis.

Speaking to journalists on his way to a EU Foreign Affairs Ministers meeting in Luxembourg on Monday, the EU’s High Representative for Foreign Affairs and Security Policy said that “it’s not the European sanctions” that are “creating this crisis.”

Russia’s war in Ukraine could push up to 49 million people into famine or famine-like conditions because of its devastating impact on global food supply and prices, the United Nations has said. Countries are scrambling to find a way around the blockade, and the US National Security Council Coordinator for Strategic Communications John Kirby has said that Russian President Vladimir Putin “absolutely has weaponized food” by blockading grain exports out of Ukraine.

Borrell’s remarks comes after Putin said that Russia’s actions in Ukraine are not responsible for the global food crisis and accused the United States of driving up food prices in his speech to the St. Petersburg International Economic Forum on Friday.

“Famine in the poorest countries will be on the conscience of the US administration and the Eurocrats,” he said.

Borrell countered these claims Monday, saying that the “the problem comes from the Russian blockade of Ukrainian grain.” Countries who want to buy Russian fertilizers are free to do so, Borrell said, reiterating that the bloc’s sanctions do not target food or fertilizers.

The Netherlands go into Christmas lockdown over Omicron wave 0