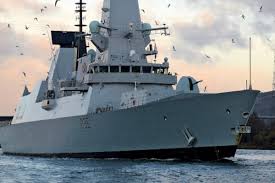 Amid a military skirmish involving a British warship in the Black Sea and purported warning shots fired by Russian forces, Moscow hinted on Thursday that next time they might target the ship itself.

The remarks came a day after Russia’s military said it had to fire warning shots and drop cautionary bombs near the HMS Defender because it has veered into territorial waters near Crimea, which Moscow controversially annexed seven years ago.

British officials denied that any warning shots were fired on the Defender and said it was sailing in international waters. A Kremlin spokesman called it a “deliberate and premeditated provocation.”

Footage of Russian Black Sea Fleet and Border Service of the Federal Security Service's prevention of the breach of the Russian Federation state border committed by the UK Navy destroyer «Defender» pic.twitter.com/4VnAlMjK4Y

Thursday, British Environment Secretary George Eustice reiterated to reporters that the vessel was in free waters and that British ships would go there again.

“What can we do? We can appeal to common sense, and demand respect for international law,” he said, according to the state-run TASS news agency. “If that doesn’t work, we can bomb not only the path but also the target, if our colleagues don’t understand.”

The Russian defense ministry published a video of the confrontation that appeared to be taken aboard a Russian fighter jet. In the video, a voice is heard saying in Russian, “If you don’t change course, I’ll fire” and shows several warning shots fired near the Defender.

Moscow’s foreign ministry said Thursday that it plans to summon Britain’s ambassador to Russia to issue a “strong demarche.”

British Prime Minister Boris Johnson said Thursday he believes Moscow had no reason to fire on the ship.

“My understanding is that [it] proceeded in a way you would expect through international waters and in accordance with the law,” he said, according to Sky News.

Rowley: “I never said the Bharatt family invited me” 0

Man stabs woman after not getting an erection 0