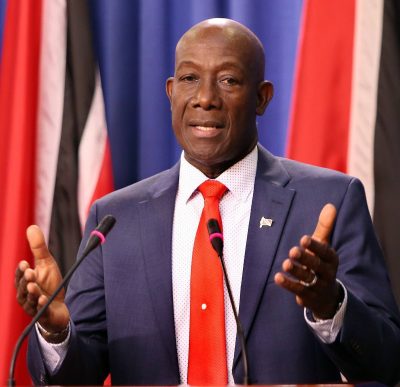 Speaking at a news conference held at the Diplomatic Center in St. Anns today, Dr. Rowley sought to clear the air on comments Dennie made last night at a UNC pavement meeting. Dennie is quoted as saying, “I am the person that they asked to fire all the East Indians from the SSA. I told them no! This made the daily newspapers. I reminded Rowley and the then minister of national security, (Edmund) Dillon, that in this country, every creed and race must find an equal place. I told them no! I am not firing any Indians”. Dennie, who worked under Dr. Rowley for close to four months described him as “the worst head of the National Security Council ever”.

Today, Dr. Rowley said that he never interacted with Dennie adding, “I have never, in my capacity as PM, spoken to Mr Dennie in any capacity – not on the phone, not in writing, not face to face. I don’t know the man”. Dr. Rowley read excerpts from some “secret files” that belonged to the Ministry of National Security which revealed that Dennie had shown unacceptable forms of behaviour especially in the areas of task avoidance, insubordination and inciteful disruptive activity.

Dr. Rowley also said that the “secret documents” contained a report detailing the removal of sensitive equipment from the server room at Piarco. Dr. Rowley said, “Both Mr Dennie and another officer were seen putting two large pieces of godmother computer equipment into a vehicle that was parked on the compound”. He also said that Dennie never had the authority to hire or fire anyone while as Director of Intelligence at the SSA. Dennie was fired from the position.