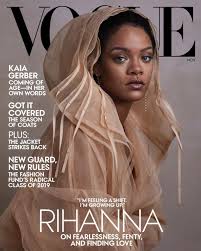 Rihanna Opens Up About Being An Immigrant in America

Rihanna is getting candid about her concerns over politics and mass shootings, and even opening up about her fears when it comes to being an immigrant in America.

The singer and fashion designer, who has long been known for doing her part to change those industries to be more inclusive, hasn’t been shy when it comes to using her platform to talk politics over the past couple of years.

But in a Vogue interview published on Wednesday, the 31-year-old Barbados native didn’t hold back when discussing President Donald Trump and his “racist” response to the mass shootings in El Paso, Texas and Dayton, Ohio.

“People are being murdered by war weapons that they legally purchase. This is just not normal. That should never, ever be normal. And the fact that it’s classified as something different because of the color of their skin? It’s a slap in the face. It’s completely racist,” she said of Trump’s response to the El Paso shooting in particular, which included him calling it an “act of cowardice” and a problem with mental illness. “Put an Arab man with that same weapon in that same Walmart and there is no way that Trump would sit there and address it publicly as a mental health problem. The most mentally ill human being in America right now seems to be the president.”

The issue is near and dear to Rihanna, who moved to the United States from the Caribbean in 2005. She called out the president on Instagram in June, and on the Fourth of July, she stepped out in a shirt that read “IMMIGRANT.”

She even condemned statements made on CNN by the acting director of U.S. Citizenship and Immigration Services, Ken Cuccinelli, who said that the people referenced in Emma Lazarus’ poem, etched on the Statue of Liberty, refers to “people coming from Europe,” specifically.

“The fact that his defense was talking about Europeans coming into America?” Rihanna told Vogue. “I mean, not only were you, immigrants, you were the worst kind. You came in and murdered the real Americans.”

When asked if she had words of encouragement for young immigrants, she didn’t hold back.

“I almost feel sick to my stomach. I don’t even believe this is happening in real life,” Rihanna said. “In front of my eyes. In front of the world. It’s not even hidden. This is blatant.”

Even though she’s been living in London, Rihanna says that she hasn’t felt distant from the issues facing minorities in the U.S. She specifically cited her responsibility to turn down the opportunity to perform at the Super Bowl halftime show in solidarity with Colin Kaepernick.

Still, Rihanna is able to identify some hope through everything that’s troubling her.

“I feel like the darkness has actually forced people to find this light within them where they want to do better,” she said. “To see it, to know it’s happening—it pushes you to want to be the light in the world.”