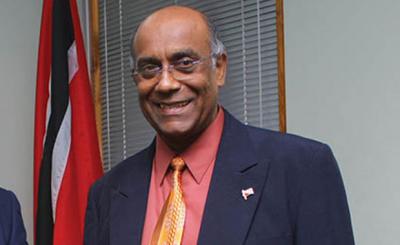 Rambachan: 2021 might be a year of “turbulence” due to decreasing economic power

It does not have to be doom and gloom in 2021 if the nation can be mobilized with an exciting vision and program for change.

In a Facebook post on Sunday, Rambachan said we should all “Learn from the Chulha Maker in Siparia to envision, to pick a niche, to be creative, and to make it happen not to become another state dependent.

He also called on the United National Congress to focus on a number of initiatives going into the New Year.

He said “There is the story of a lady making Chulhas and clay ovens as a result of having to survive during covid. She did not sit down and become a state dependent. She was not afraid to dirty her hands with mud and gobar. She invented a vision, reinvented herself, made action her mantra and is creating a sustainable job for herself and her family. Can we learn from her? Or better yet do we consider her example one of relevance amidst our current economic challenges. I do, because she has a ‘make it happen attitude’ something that we are missing in this country.”

Rambachan said “The nation is heading into what many describe might be a year of turbulence. Given the spectre of continuing job losses and business closures as well as closed borders affecting tourism, it is clear that policy prescriptions supported by strategic interventions will be necessary to stave off an economic crisis with its social outcomes.

He added that “The scaling down by BP of 149 staff members is no small deal. Unfortunately like Petrotrin it has just passed away with the holidays consuming the painful reality of job losses. With companies discovering the power of technology to conduct business and with more people working from home and having to produce,it is likely that many rented properties will be empty like the malls in which several retail businesses have closed, some for good. With economic power at the level of the individual declining or threatened, mortgages will fall into problems as well as car loans. New buyers for homes will likely be lower, affecting construction. Government intervention will be necessary to keep people employed in construction. Import substitution and more local inputs into manufacturing is a must. The emphasis has to be on agricultural production.”

“The government is likely to harp on the 50 dollars plus per barrel for oil as well as the better gas prices as evidence that we are not going to be badly off. This of course will
also be due to our heritage and stabilization fund which has been used to supplement falling revenues. But with less foreign exchange the situation gets complex and more so with shipping companies being the first to indicate that US dollars will be required for payment. Trouble ahead for cost of food and other essentials.

The issue and challenge is how long can we sustain an economy where state dependents have grown and will continue to grow.

He said as an alternative government, the UNC should focus on achieving a diversified economy with sustainable jobs and foreign exchange earnings; reducing poverty and move more people up the economic ladder with the ability to house, feed, educate and keep their families healthy; raise the standards of performance and delivery of public service institutions, including but not limited to health water and electricity; deal with environmental degradation including climate change and community hygiene; create safer communities and reduce crime; create a competitive people to compete with the best in world and ensure social stability.

“T&T will accept and administer the COVID-19 vaccine” Dr. Rowley 0