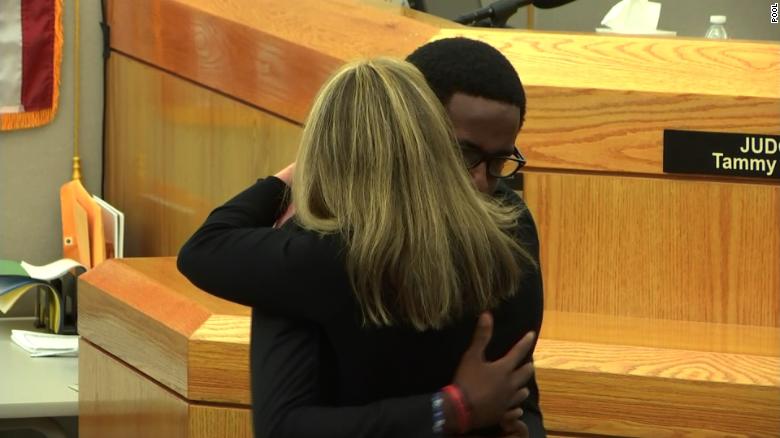 Inside the courtroom, many observers cried as Botham Jean’s brother forgave and hugged former Dallas police officer Amber Guyger, who had been convicted of murder in Jean’s death. Outside, protesters denounced the 10-year sentence Guyger got as too lenient.

The conclusion of the trial mirrored the gamut of emotions displayed during the week-long proceedings, with Jean’s parents taking the stand with poignant testimony about their son, Guyger saying she wished she were the one who was shot and prosecutors describing the former cop as negligent in missing myriad signs that would have tipped her off that she was on the wrong floor, in the wrong apartment.

Jurors convicted Guyger on Tuesday for murder in the fatal shooting of Jean. Wednesday, after hours of moving victim impact statements, the same panel sentenced her to 10 years in prison. She’ll be eligible for parole in five years.

"I think you saw in Brandt what you would have seen in Bo."LIVE INTERVIEW: Prosecutors in TX v. Amber Guyger describe the moment Botham Jean's brother Brandt Jean forgave Amber Guyger. Tune in NOW: court.tv/live

Meanwhile Botham Jean’s mother said she hopes Amber can use the 10 year sentence in prison to reflect on what she did and make a change in her life. She said the City of Dallas and the Dallas Police Department have a lot of cleaning up to do as she witnessed a host of corrupt practises by several police members.

CALL FOR CHANGE: After the sentencing of her son's murderer, Botham Jean's mother calls on the city of Dallas to strive for change. court.tv/live