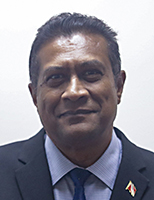 Proposal Made For A National Climate Change Policy Locally.

A call has been made for consideration to be given, by the Government, for the setting up of a national climate change policy in Trinidad and Tobago.

The appeal came from Independent Senator, Deoroop Teemal, while giving his contribution to the Budget Debate in the Senate Wednesday afternoon.

The Independent Senator highlighted the importance of such a policy especially at a time when there is growing concern and evidence of the impact of climate change.

Commenting on another matter, Mr Teemal questioned whether the population was getting value for money from spending by the government on desilting and clearing water courses.

Mr Teemal also proposed a flood management plan should be introduced, adding that such a measure is urgently needed in Trinidad and Tobago.

$20M approved for ‘A Taste of Carnival’ events 0