Political Leader of the Progressive Party Nikoli Edwards has attracted polarizing views because of the controversial statements he made against former Public Administration Minister Marlene McDonald. 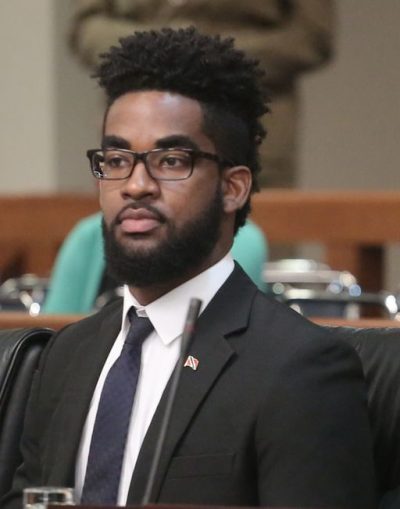 Speaking at a media conference in St. Anns yesterday, the young politician condemned the PNM for showing support for their fallen comrade. McDonald was allowed to return to her home in St. Joseph yesterday after being discharged from the St Clair Medical Center. She sought medical care while awaiting her bail of TT$2 million dollars to be posted after she was arrested and charged for fraud and misbehaviour in public office. Following her charge, she was relieved of her ministerial post and fired as Deputy Political Leader of the PNM.

Edwards stated that the money allegedly stolen by McDonald could have been used to purchase medication for hospitals, pay disability grants and reduce the national debt. But many people were not in favor of his blunt remarks.

Shortly after the video was uploaded to TTT’s Facebook page, many citizens decided to weigh in on his comments.

Another Top Fan of the page said “Like you was looking for an early excuse to part from politics. If you had ten supporters, you just lost eight”.

Luke Pilgim added “Rea Ann, Progressive party ain’t getting as much as 1 seat…only 2 winning parties we kno of…unc and PNM”.

Anthony Bridgeman added “Wah u really “saying” you not supporting friend and colleague in times of trouble then how can you be a leader”‘ sometimes reactions shows faults”.

Marcus Gonzales commented “he really call a press conference for that…he is a baby in d politics in truth”.

Annie Modeste added “Why is he disappointed? Innocent until proven guilty either by God’s judgement or the court system which ever comes first”.

But, there were a few supporters among the group of naysayers.

Sue Sookdeo added “…The guy is stating facts that the PNM members are supporting her wrong doing. The money stolen could have been used constructively for the betterment of the country. Tell them Nikolai”.

Jesse Bernard added “As much as it hurt, he does have a point as MPs should always be held to account for their actions…”.

John Carter another Top Fan of TTT’s page said “If people is suspect in thiefing, it eah have no support in that, let the court decide”.

Other persons who commented alluded to the fact that Edwards lacked political experience when compared to his rivals from the PNM and UNC. They also commented on his hairstyle, which many regard as being unconventional for a future Prime Minister.

The Progressive Party is still in its embryonic stage when compared to other local political parties. The party was launched in June of this year. Edwards, as Political Leader, has confirmed that the party will contest all 41 seats in the 2020 General Election.