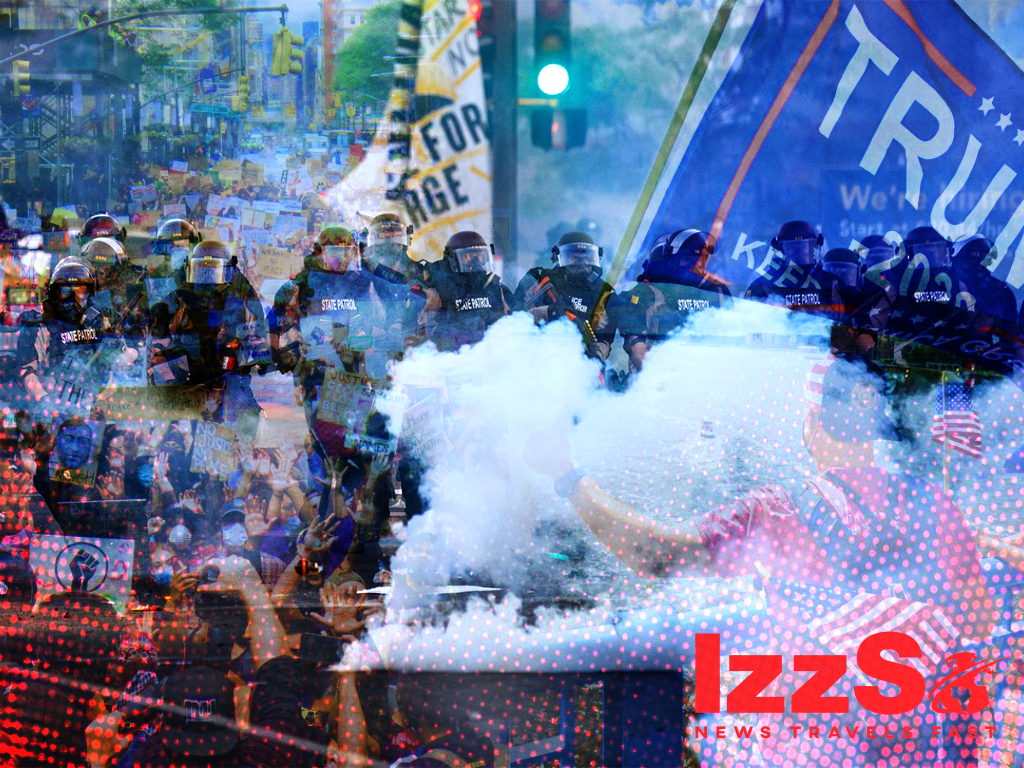 Pro-Trump Capitol Riots Get Sympathy, While BLM Protesters Are Terrorist

Civil rights leaders and activists blasted the U.S. Capitol law enforcement agencies for their slow response to Wednesday’s riots by pro-Trump supporters, as in contrast, there was a tremendous police presence during 2020’s BLM protests over police killings of unarmed African Americans in the US.

Last year, people of colour in their thousands and allies marched on the streets, peacefully protesting but were met with the US Capitol law enforcement using tear gas, rubber bullets and bruising their faces and bodies. However, as thousands of pro-Trump supporters, (who are mostly whites) marched to the Capitol Wednesday, they were able to break into the building, forcing lawmakers and staff to shelter in place. Hmmm…This seems very partial!

D.C. police chief Robert J. Contee III said the crowd came to Capitol Hill “following the president’s remarks” and was “intent on causing harm to his officers by deploying chemical irritants on police to force entry into the United States Capitol.”

One video posted to social media showed several people in D.C. Capitol Police jackets removing barriers outside the Capitol building, allowing demonstrators to pass through to the building. Videos posted to Twitter also showed at least one person who appeared to be an officer taking selfies with people who had breached the Capitol.

By Wednesday afternoon, several videos shared to social media showed officials slowly escorting people out of the building. One officer in riot gear could be seen helping a white woman in a Trump hat down the Capitol steps, holding her hand, according to a CNN livestream.

One person suffered a gunshot wound inside the capitol, and the situation was under investigation, Contee said. (viewer discretion advised)

Johnson questioned why the Capitol police and other local law enforcement agencies weren’t prepared for thousands of Trump protestors, including the Proud Boys. There had been plenty of warnings on social media and talk shows about the potential for riots, he said.

“We should not be witnessing what we are witnessing today in this nation,” he said. “It is a global embarrassment.”

Johnson said tens of thousands of people joined protests at Black Lives Matter Plaza in Washington without this level of violence. “None of this took place,’” he said.

The majority of Black Lives Matter-affiliated protests over the summer were peaceful, according to a report by the U.S. Crisis Monitor, a joint effort including Princeton University in New Jersey that collects and analyzes real-time data on demonstrations and political violence in the United States.

Imagine if #BlackLivesMatter were the ones who were storming the Capitol building.

Thousands of black people laying siege to the seat of government — in the middle of a joint session of Congress?

This is how law officials dealt with BLM protesters in 2020:

At the Capitol Wednesday, some lawmakers were holed up in their offices and other places. Several would not say where they were for safety reasons. Staffers were cleared out of the press galleries and the Capitol by the afternoon.

The decision to ask for the National Guard to intervene comes as protesters breached the Capitol during Wednesday’s counting of electoral votes. Police barricaded the doors of the House chamber and had their guns drawn and there were reports of shots fired inside the building.

The chaos that unfolded Wednesday stands in particularly harsh contrast to the law enforcement presence seen when U.S. and military police drove protesters out of Lafayette Square, located between the White House and the historic St. John’s Episcopal Church, shortly before a presidential photo op with a Bible at the church on June 1. Officers used smoke canisters, shields, pepper balls and horses to force demonstrators from the park.

Observers on social media were quick to note the discrepancy in law enforcement:

All I know is that if you were a mob of Black Americans, you don’t get to breach the Capitol Building without a shot being fired.

We knew this already but it’s so crazy to watch it in real time. It’s really niggas being k*lled at their own cars during traffic stops but these maga freaks can break into the capitol and drag the fucking podiums around lol two different worlds for real.

There are still insurrectionists near the Capitol facing off with DC National Guard, and in violation of curfew. Why aren't they being arrested?

U.S. Rep. Ron Kind, D-Wis., was holed up in his Capitol Hill office Wednesday as protestors continued their assault on the Capitol. During a Zoom call with reporters, he said he and his staff were safe and weren’t leaving. Kind said he intended to return to the House chamber to continue the debate over the certification of electoral votes.

Kind blamed Trump, who has been reluctant to denounce white nationalists and fraudulently insisted he won the November election, for encouraging the violence Wednesday.

“When he was encouraging the demonstrations, tweeting out that this was going to be quote ‘wild.’ I mean, what would he expect the reaction would be, especially when you’re talking about the Proud Boys, militia groups, white supremacists coming into our nation’s capital today,” Kind said.