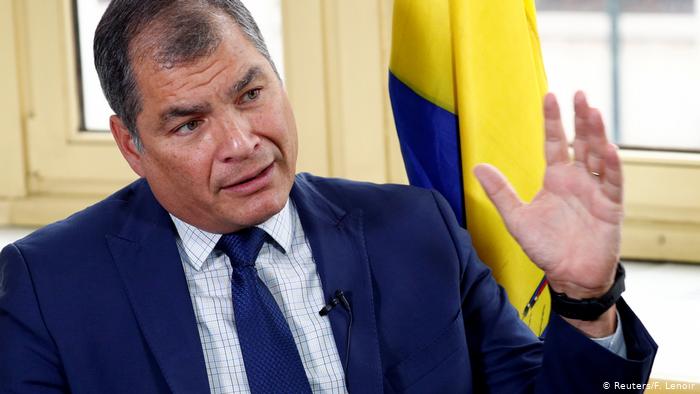 A court of the National Court of Justice (CNJ) of Ecuador ordered this Wednesday the location and capture of former President Rafael Correa, sentenced to eight years in prison for bribery in a case known as “Bribes 2012 -2016 “, for which he also lost his right to participate in elections.

Judge Iván León, after confirming that the process is “executed” or “firm”, ordered that this same Wednesday the respective letters be sent to the police authorities for the “immediate location and capture” of those sentenced.

In addition to Correa, the order weighs against his former vice president Jorge Glas (in prison for another case of corruption), and other former officials and several businessmen also involved in the corruption scheme, which they deny.

The magistrate also ordered that an official letter be sent to the National Electoral Council (CNE), since the sentence provides “the loss of the participation rights of all those convicted, for a period equal to that of the sentence.”

It also decided to send the Ministry of the Economy an order to eliminate the life pension that Correa and Glas received, as ex-presidents.

It also orders that the pertinent institutions take note of the amounts on compensation to the victims (the State) of the crime, on the confiscation of property to comply with the “integral reparation” for a global amount of $14,745,297.16 dollars.

Regarding the decision to sentence the accused with “measures of symbolic reparation,” the court stated that it will set the time and day for them to do so in the Plaza de la Independencia, in the colonial center of Quito.

Likewise, they must place a plaque in the Presidential Palace of Carondelet, in the center of the capital, with the following text in Spanish and Quichua: “Public resources must always be administered honestly, public service is nothing other than a service to the community, subject to the principles of ethics “.

On the 7th, a Court of Cassation of the Superior Court of Justice rejected the appeal filed by Correa and other defendants, for which it ultimately ratified the sentence to eight years in prison.

The case investigated a corruption network through which “undue contributions” were received in the Carondelet presidential palace for the irregular financing of the official political movement Alianza País in exchange for the awarding of millionaire State contracts to companies, including Odebrecht.