Following threats issued via a WhatsApp message last week , the house of a prison officer has been shot up. The Plessantville home of Okang Harris was shot at just after midnight. 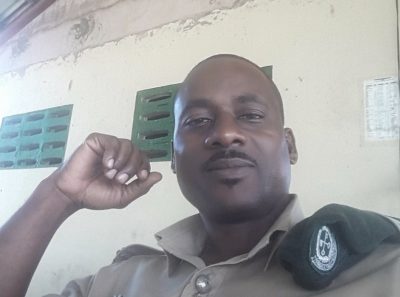 Harris who is stationed at the Golden Groove prison was attending a function when his daughter called around 12:35 am and said that she heard several loud explosions and called the police.

Harris who has been in the prison service for over twenty years rushed home to find police on the scene. There were bullet holes on the wall of his house not far from other bullet holes which had remained there after a prior shooting incident just over a year ago.
His four children who range in ages from 10 to 23 years old and his wife who were all home at the time of the attack were traumatized by this latest attack. His eldest daughter said a man wearing a hoodie was seen running down the street after the incident.

His family including his wife and four children are now fearful about their safety since this is not the first attack on their home and in the wake of the threats issued to all prison officers last week. Harris said he had no ‘beef, with any inmate but his daughter had witnessed a robbery recently, but he could not say if it was related.

Neighbors said they saw a white Tida parked in the area earlier.
The family is traumatized but no one was injured in the attack.

Police are continuing investigations and additional security arrangements have been put in place for Harris and his family.