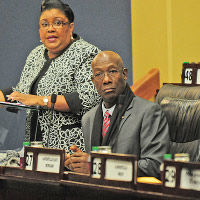 Meanwhile Ms. Marlene McDonald, who is the Member of Parliament for Port-of-Spain South has been hit with $2M bail and still unable to access bail as she is still warded at St. Clair Medical Centre.

McDonald who did not appear in court on Monday was granted bail in absentia after the court heard, through her attorney Pamela Elder SC.

But when news broke of her arrest and charges, Izzso took to the street to hear what the ‘man on the ground’ had to say about their MP’s legal battles.