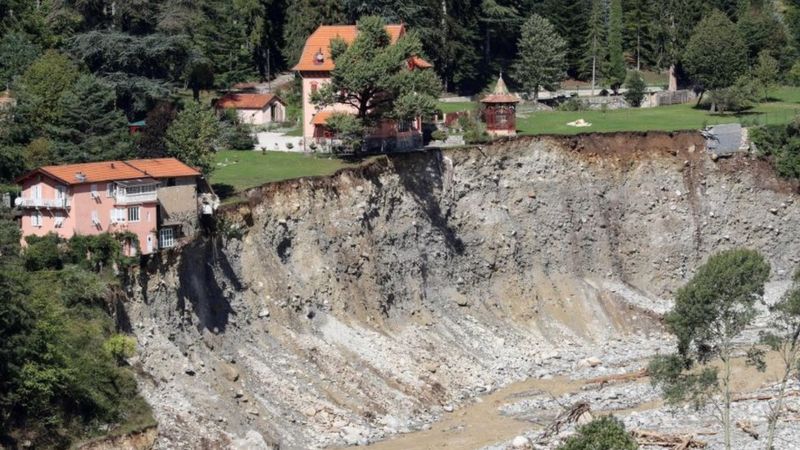 At least two people have died and up to 20 are still missing after a powerful storm hit south-eastern France and north-western Italy.

A number of villages north of Nice in France suffered serious damage from floods and landslides, with roads, bridges and homes destroyed.

In north-western Italy, flooding was described as “historic”. A section of a bridge over the Sesia river collapsed.

French Prime Minister Jean Castex has deployed the army and released emergency funds to tackle the worst floods for decades in south-eastern France.

Up to 20 people are either missing or have not checked in with relatives.

“There are very many people of whom we have no news,” Mr Castex said.

Bernard Gonzalez, prefect of the Alpes-Maritimes region, said: “Just because their loved ones haven’t been able to get in touch doesn’t mean that they have been taken by the storm.”

He said the prospect of more rain was “a worry”.

Meteorological agency Météo-France said 450mm (17.7in) of rain fell in some areas over 24 hours – the equivalent of nearly four months at this time of year, reports Reuters news agency.

The southern Alps region appeared the worst hit, with serious damage in the Roya, Tinée, Esteron and Vésubie valleys.

The villages of Saint-Martin-Vésubie and Rimplas were cut off, with roads inaccessible.

In Italy?
The two fatalities were a 53-year-old firefighter in the Aosta Valley who died during a rescue operation, and a 36-year-old man whose car was swept into a river in the Piedmont region. His brother managed to get out of the car.

A section of a key bridge over the Sesia river in Piedmont’s Vercelli province collapsed shortly after it had been reopened on Saturday afternoon.
In the rest of Piedmont, several villages were cut off after the rains made roads impassable. The situation there was described as “extremely critical” by officials.

Piedmont President Alberto Cirio told La Stampa that 630mm of rain had fallen in 24 hours, an amount “unheard of since 1954”.

Hundreds of aid workers have been sent to help rescue efforts in the cut-off villages.

The storm also affected the north-western regions of Lombardy and Liguria. The Roja river in Ventimiglia has also flooded.

Flood alerts remain for sections of the Po river which have swollen by 3m in 24 hours.

One good piece of news was the rescue of about 20 people reported missing by Italian authorities just over the border in France.