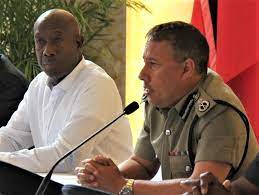 Pool party fallout behind Rowley’s loss of confidence in Griffith

A newspaper report says that the Prime Minister’s loss of confidence in former Commissioner of Police Gary Griffith stemmed from the fallout over the Bayside Towers pool party COVID-19 protocol breach issue.

The duo clashed after police were called to the party but refused to arrest anyone for breaching the public health regulations as the COVID health restrictions reportedly did not prevent family and friends from gathering on private property.

Rowley, in response to public furore over the matter, called on police to treat all citizens equally regarding the enforcement of the public health regulations.

Griffith, in turn, challenged Rowley on the issue publicly explaining that he was only enforcing the regulations which Rowley’s Government had passed and suggested that if Rowley was displeased, then the Government should make the changes it wanted to see implemented.

Rowley reportedly took umbrage to Griffith’s comments and according to the Guardian newspaper, subsequently wrote to the Police Service Commission and its then President, Bliss Seepersad, stating that in his years of public service he’d never known a CoP to publicly engage a Prime Minister and certainly not in the manner Griffith had done in the previous days.

The letter also claimed that Griffith publicly accused Rowley of being a hypocrite, of encouraging the TTPS to breach the Constitution, of being a racist and of being incompetent.

Rowley said in the letter that he was not prepared to tolerate disrespect to the Office of Prime Minister and expressed “serious concerns about unacceptable behaviour” on Griffith’s part and “his suitability to continue to hold the office of Commissioner.”

Seepersad then wrote to Griffith seeking an explanation from him on the issue and noting Rowley’s expressed concerns.

According to the Guardian, Griffith however maintains that the issue between himself and Rowley had been resolved as he’d apologised and they’d moved on.

He claimed the matter was laid to rest as evidenced by the PSC having him at the top of the merit list for acting CoP earlier this year.

It is not yet known how the newly constituted PSC will move forward in its search for a new CoP , if it will retain the merit list decided upon by the previous PSC or if it will create a new one and if Griffith will be included.

Cardi B wanted to bite Halle Berry after meeting her 0