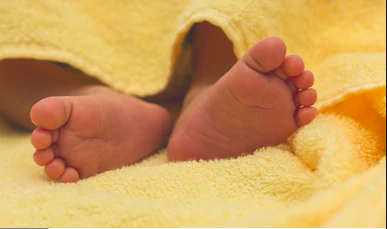 A mother from Gasparillo had her baby taken from her after a threatening message was sent to the baby’s paternal grandmother.

Last Friday, officers removed the six-week old baby boy from his mother’s care after seeing the message which read:

“Let (the baby’s father) know he caused this, and I hope it haunts him every day that he lives. And when they find us the world will know of the abuse and they will know why I did what I did. This was my last straw. This postpartum got the best of me. Goodbye.”

She also sent a picture of her holding the baby upside down with one leg, which she claims aids in the sensory development of the brain.

The 31-year old mother of three said that the message was meant to convey her intent to runaway with the baby, nothing more.

Her other children are aged three and nine years.

Although she believes that she will get back her baby, she admits to feeling sad that police took him.

“I feel so empty without him. I have not been able to eat anything. No one knows what I am going through.”

The mother, who owns a medical supply business, admitted that she and the child’s father have been having problems in their relationship.

Last Tuesday, they both had a fight at her apartment.

Following the incident, she packed his items and took them to his mother.

She said that she filed for sole custody of the baby at the San Fernando Magistrates Court last week but the case was adjourned to Monday.

The Children’s Authority of Trinidad and Tobago  has stepped in, and has launched an investigation into the matter.

The child is currently staying with his father.

Amidst new questions surrounding the leadership of Heritage Petroleum, the government announces a new Board 0