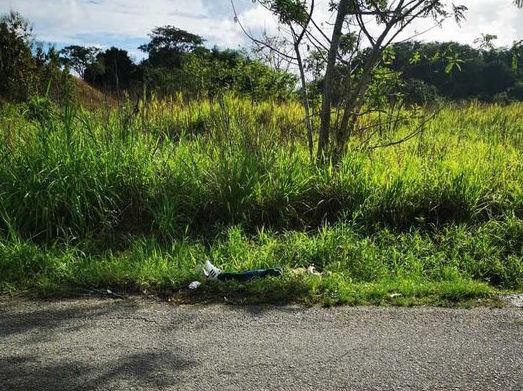 Homicide investigators are trying to determine the identity of a man, whose body was found in Macaulay Village, Claxton Bay on Sunday morning.

Police stumbled upon the corpse, which had a bullet through the back of the head.

Investigators said the victim appeared to be in his thirties and was of African descent. His hair was braided, and he had a beard.

He wore a grey T-shirt and blue jeans and the numbers 1-9-8-8 had been tattooed on his abdomen.

A team of officers led by Supt Nobbie and Insp Joseph Carraspe visited the scene along with homicide officers. Although no spent shells were found, police retrieved a pouch nearby which they say could have belonged to either the victim or one of his attackers.

Anyone with information on the incident can contact CrimeStoppers at 800 TIPS or call 482-GARY.

Acting CoP Gary Griffith Remains Hopeful That The Reputation Of The Police Service Commission Is Not Tarnished. 0