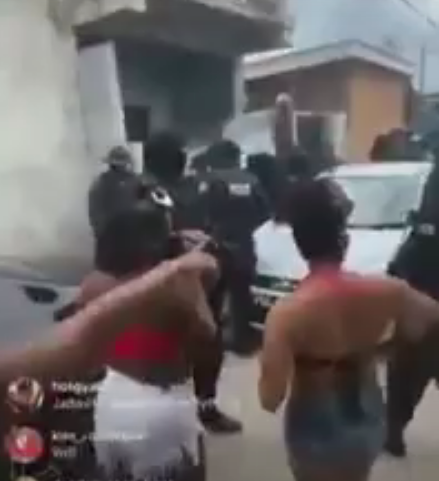 Police chase close to 300 ‘zessers’ from a party in Sea Lots; one man arrested

Approximately 300 ‘zessers’ had to be dispersed from a party in Sea Lots, Port-of-Spain on Monday.

The private party took place at the home of a deceased gang leader on Production Drive just after 10 am yesterday.

A team of officers from the Port-of-Spain Division Task Force, attempted to shut down the event, which was in breach of public health regulations, but reports are that the crowd was too much for the small number of officers, as they became angry and began cursing and advancing on the officers.

Back up was then notified and units from the Port-of-Spain Task Force, Inter Agency Task Force and the Emergency Response Patrol responded.

On seeing the larger contingent of law enforcement officers, the crowd then dispersed.

One man, who reportedly incited the crowd to chase the police out of the area, was arrested and taken to the Besson Street Police Station, where he was charged with breaching the Public Health Regulations, using obscene language and resisting arrest.

17-year-old shot and wounded in Arima 0

Police officer sentenced to 43 years for rape of teenager 0