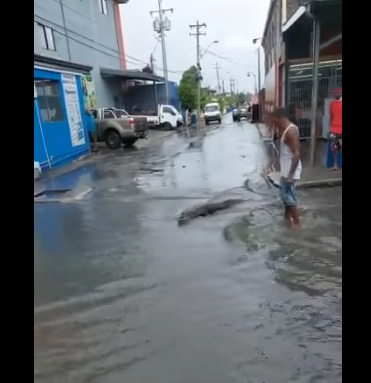 Barataria police have detained a man, who was filmed abusing and later killing a caiman in Aranguez, San Juan on Thursday.

According to reports, the individual was located yesterday by members of the El Socorro Centre for Wildlife Conservation (ECWC).

A GML report states that ECWC founder Ricardo Meade received numerous calls from concerned citizens and they went in search of the man in the vicinity of where the video was recorded.

The man was found sitting at a bar near Aranguez Main Road and the police were immediately contacted.

Meade said within minutes they arrived.

The man said he was attempting to save the caiman from getting bounced.

The amended Animals (Disease and Importation) Act, at Chap.67:02 (assented to on July 3, 2020) section 18 A, states: “Any person who cruelly beats, ill-treats, starves, overdrives, overrides, overloads, abuses, tortures, neglects or otherwise maltreats any animal commits an offence of $200,000 fine and imprisonment for a term of 5 years on summary conviction.”