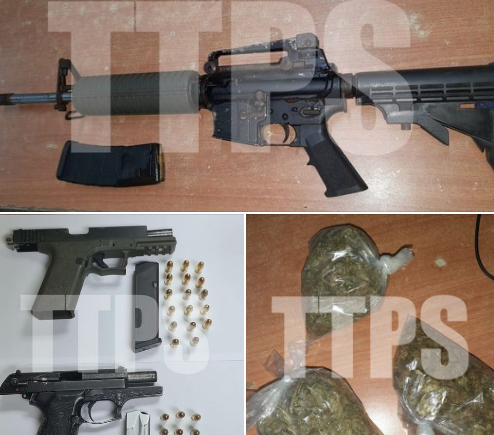 Over a period of 14 hours on December 2nd, 2022, Anti-Crime, Warrant and Narcotics and Firearms Eradication exercises have led to the seizure of four firearms and 45 rounds of ammunition in the Western, South-Western and Southern Divisions. A quantity of drugs was also seized during the exercises and a total of six persons were arrested in connection with the guns and drugs.

In the South-Western Division officers executed a search warrant at a residence in the Boyack Terrace, Santa Flora area. An M-11 Nine millimetre Leinad Ducktown was found during a search of a bedroom on the eastern side of the house. The firearm was seized and the resident arrested. Officers also seized what appeared to be cocaine from the same room.

In the Southern Division, an intelligence led operation resulted in the seizure of an A4 Assault Rifle fitted with a magazine containing four rounds of 5.56 ammunition. Officers proceeded to Montgomery Street, Ste Madeline where they observed a group of men congregated under a tree. On seeing the officers, the men fled. A search of the area resulted in the seizure of the high powered weapon which was found in a bushy area concealed in a white crocus bag.

No arrests were made in relation to the find.

Three men were also arrested during a Narcotics and Firearms eradication exercise in the Southern Division on the same day. The men ranged in ages from 30 to 40 years old and were from the San Fernando, Cocoyea and Pleasantville areas.
Investigations into the incidents are ongoing.