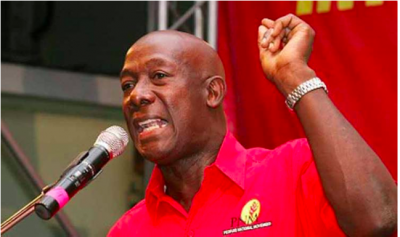 Prime Minister Dr Keith Rowley is “calling out” the opposition for their failure to support the Bail Amendment Act. He made this claim in the presence of those who attended the Diego Martin West Constituency’s 46th Annual Conference, held at the Pt. Cumana Regional Complex on Sunday.
During his address Dr. Rowley noted the crime plague facing Trinidad and Tobago, adding that the Parliament intends to reconvene on Wednesday to debate the Bail Amendment Act. He said that Parliament could not continue to “vacation” when it could take action to chip away at the prevailing gun crimes, taking place throughout the country. He admitted that before the Parliamentary term closed, a vote took place close to pass the Bail Amendment Act but noted the opposition’s failure to support the Bill in the Senate. Despite this, it was passed with support from the Government and Independent Senators. He said a case had to be made by the Government to convince to the Opposition to pass the Bill.
Dr. Rowley accused the UNC of having no interest in confronting the criminal elements in this country.
During the Conference, Dr. Rowley also addressed the Law Association’s call for him to invoke Section 137 of the Constitution to form a tribunal to investigate allegations made against Chief Justice Ivor Archie. Dr Rowley defended his decision not to advise the President to invoke Section 137.
He noted that apart from his constitutional role in the matter, he was guided by independent legal advice and also actions by some elements of the Law Association who he accused of being politically aligned.

Bring it On! Augustine tells Tracy he’s not afraid to go to Court 0