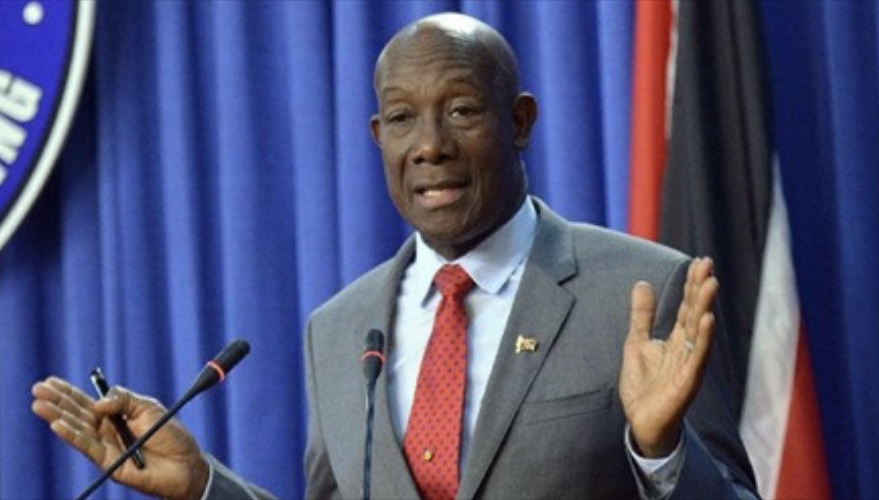 PM Keith Rowley says “No One is Above the Law”

Prime Minister Dr. Keith Rowley Thursday said he was not immediately made aware of the arrest of his former public administration minister, Marlene McDonald, but defended the actions of the police insisting that “no one is above the law”.

Rowley, speaking at the weekly Cabinet news conference also defended his decision to appoint McDonald as a Cabinet minister, despite having fired her on two previous occasions since the ruling People’s National Movement (PNM) came to office in September 2015.

He reminded journalists that the investigations into the former minister dates back to 2008 when she was a part of the Patrick Manning administration and according to the charges as read in court, the police probe of alleged money laundering, misbehaviour in public office and fraud continued under the People’s Partnership government that succeeded the Manning administration.

“I have no doubt whatsoever that there are people in this country who would have preferred for those allegations to have been made about me and for me to be directly and personally responsible and held in handcuffs for public money,” Rowley said, dismissing suggestions that he had not acted swiftly in dismissing McDonald soon after she had been brought in for questioning last Thursday.

“What was my judgement….wrongdoing in 2008 had nothing to do with me and my government. 2009, I was not even there. 2010 the government changed, the wrongdoing by the allegations you would have seen in the papers continued 2011, 2012, 2013 under a different government.

‘You know you in the media have elements of that government calling on this prime minister to account for something that happened under two governments, none of which was mine and between 2011 and 2013 when the public money was apparently moving around I wasn’t aware as opposition leader that government was on top of that,” Rowley said.

McDonald has been released on two million dollars (One TT dollar=US$0.16 cents) bail after being charged with four other people on several charges of conspiracy to defraud the government.

Chief Magistrate Maria Busby Earl Caddle also set bail at TT$500, 000 for Michael Carew, 74, who is McDonald’s husband, one million dollars for Edgar Zephyrine, 75, the former head of the National Commission for Self Help, TT$100, 000 for 66-year-old contractor Wayne Anthony and TT$400,000 for another contractor, Victor McEachrane, 65.

They are due to return to court on September 9.

The magistrate read a total of 49 charges with the crimes allegedly taking place between November 8, 2007, and August 11, 2017.

McDonald, 61, who was sacked by Prime Minister Rowley on Monday, faces seven charges, including two for conspiracy to defraud the state. She is also is charged with misbehaviour in public office.

The allegations are that McDonald approved millions of dollars in funds for organizations linked to at least two of the accused and in addition all of the accused received the funds knowing or having reasonable grounds to the effect that it was criminal property and constituted criminal conduct in the form of conspiracy to defraud the government. The 49 charges were laid indictable and the accused were not called upon to plead.

Rowley said that the action by the police underscores the move by his administration to change the issue of dealing with white-collar crime adding that where the opposition is regarding the unfolding situation as a “crisis” in the country, “we are saying to you the people of Trinidad and Tobago feel good about it, this is how it is supposed to happen.

“This is how it is happening for the first time. Exactly what you want to happen is happening. That if persons, especially public officials misconduct themselves there must be policing to identify the misconduct and the persons must be held accountable and it will end up as a trial in the courthouse where they are innocent until proven guilty.

“That is what you want and when I say we are building a new society that is what the new society is to expect,” Rowley said, insisting that “no one should be above the law”.

He told reporters that the police had been able to perform their duties without informing him or the Minister of National Security.

“As Prime Minister of this country and as chairman of the National Security Council, a minister is in custody. The systems in this country are as such that they are so secure that nobody in officialdom communicated with me as Prime Minister to indicate that there is substance to what is going on here either before or during that a minister is in custody for this reason……

Rowley said that he was only informed on Sunday about the arrest officially “but there are some people saying the minute I heard that the DPP had granted clearance for the police to proceed I should have fired the minister.

“The first time I had any official information was…on Sunday night. That was the first time an official told me in my official capacity as Prime Minister of Trinidad and Tobago that this minister and the information I was getting then wasn’t that she was being questioned (but) that the minister is being charged …

“So for the first time I now know exactly what the situation is and by Monday morning …steps were taken to have the minister removed from the Cabinet,” Rowley said, telling reporters that prior to the latest police investigations, he had been given assurances by McDonald that she was innocent of the allegations that had been the subject of investigations by the Integrity Commission.