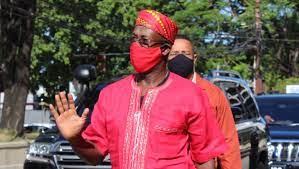 Barbed comments have begun flying as tension heats up over the wage negotiations between the labour movement and the Government.

This as Prime Minister Dr Keith Rowley has hit back at comments directed at him by National Trade Union Centre (Natuc) general secretary Michael Annisette.

Trade unions marched in Port of Spain on Friday to protest the proposed offer of zero, zero, two, zero, zero, two for each year successively from 2014-2019.

During Friday’s march, Annisette accused Dr Rowley of being disrespectful and not caring about women and children.

Annisette also inserted a comment referencing race saying that “Black people are strong before adding that the PNM will pay the price for the 4 percent offer.

However, in a Facebook post yesterday morning, Dr Rowley rejected Annisette’s criticism and enquired about the reason for Annisette’s comments.

He asked Annisette in his Facebook post, “What have I ever done to cause you, of all people, to make such accusations against me?”

The Prime Minister challenged Annisette to a public discussion on caring and respect for women.

He insisted that in his role as Prime Minister, he is sworn by the constitution to always put the national interest first.

Dr Rowley suggested that as a union leader, Annisette was bound by no such duty as his job was instead to provide the best representation for those whom he leads rather the country as a whole.

Dr Rowley also denounced the introduction of race into the discussion.

He noted Annisette’s racial references and said “…there is no 4% offered to black and African people”.

The Prime Minister added that the offer by the Government applies to all the public officers for whom the CPO is their employer, of all races, classes and creeds.