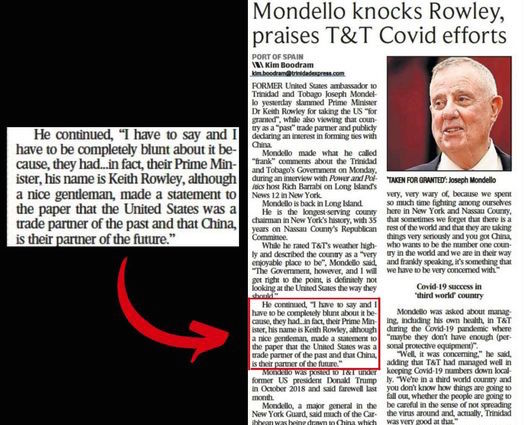 In a statement to his social media page, Rowley said “I have made no such statement to any newspaper. If anybody can find such a statement as specifically mentioned I will apologize…”

Former US Ambassador, Joseph Mondello, during an interview with Power and Politics host Rich Barrabi on Long Island’s News 12 in New York, spoke highly of his time in TT but said “The Government, however, and I will get right to the point, is definitely not looking at the United States the way they should.”

Mondello said, “I have to say and I have to be completely blunt about it because, they had…in fact, their Prime Minister, his name is Keith Rowley, although a nice gentleman, made a statement to the paper that the United States was a trade partner of the past and that China, is their partner of the future.”

Rowley said “What I do recall saying publicly on numerous occasions is that the US is our major trading partner and we continue to encourage US investment in Trinidad and Tobago.
We also take advantage of our opportunities with China which is now one of the major trading nations of the world. It was never a case of one or the other. We maintain good, friendly, business relationships with both world powers as we look after the interest of the people of Trinidad and Tobago.”

Gadsby – Dolly: Over 2000 students have turned up to remedial programme 0