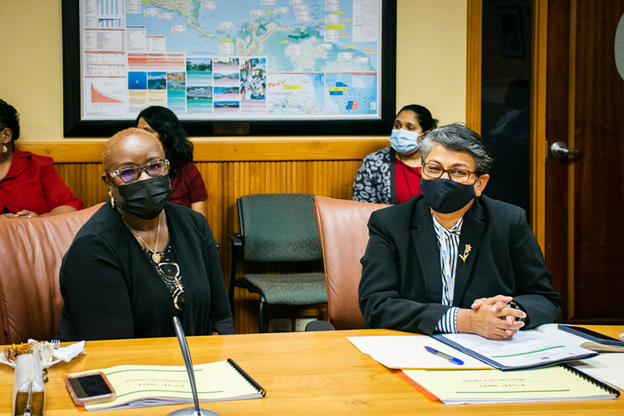 Planning Minister back out to work and in good spirits

Planning and Development Minister, Camille Robinson-Regis has hit the ground running on her first day back at work after a period of medical leave by hosting PSIP meetings with the Labour and Youth Ministries.

A media release issued this afternoon said, Planning and Development Minister Camille Robinson Regis is encouraged that Government’s digitization plan is gaining increased traction in Government Ministries and underscored that the digitization process is improving service delivery in Trinidad and Tobago.  A case in point is the Town and Country Planning Division’s digitization projects and the automation of the construction permitting system, called DevelopTT.

On her first day back to work on Wednesday March 10, after a period of sick leave from February, Minister Robinson-Regis hosted Public Sector Investment Programme (PSIP) 2021 Meetings with the Ministry of Labour in the morning and the Ministry of Youth Development and National Service from 1pm. These meetings are being conducted with all Ministries over the next few weeks to determine progress, successes and shortcomings in the PSIP programmes and projects proposed for the 2020-2021 fiscal period.

In her call to action, the Minister emphasised the importance of enhancing data collection and monitoring and evaluation of PSIP projects, stating that this is an important tool in understanding a project’s progress, success and delivery, thereby allowing the nation’s citizens and stakeholders to realise the benefits of Government’s plans.

During the Ministry of Labour’s presentation led by Labour Minister Stephen Mc Clashie, which was done virtually, a project expediting Labour Legislation Reform proposed for 2021 was on the agenda. The objective of this project is to create a modern and model legislative framework that allows businesses and employees to thrive in an environment of co-operation and sustainability; and to maintain a favourable industrial relations climate based on freedom of association and the right to collective bargaining. The Ministry of Labour’s flagship PSIP project is seeking to address four areas of reform:

The Ministry of Planning and Development is the lead Ministry for the Government’s Public Sector Investment Programme, and supports the management of 1,059 projects for the 2020-2021 fiscal period with a proposed allocation of approximately TT $4.1 billion.

The PSIP is the capital expenditure component of the National Budget and its programmes and projects are geared towards achieving the national goals of Trinidad and Tobago’s National Development Strategy, Vision 2030 as well as in realizing T&T’s commitments to the global Sustainable Development Goals (SDGs).