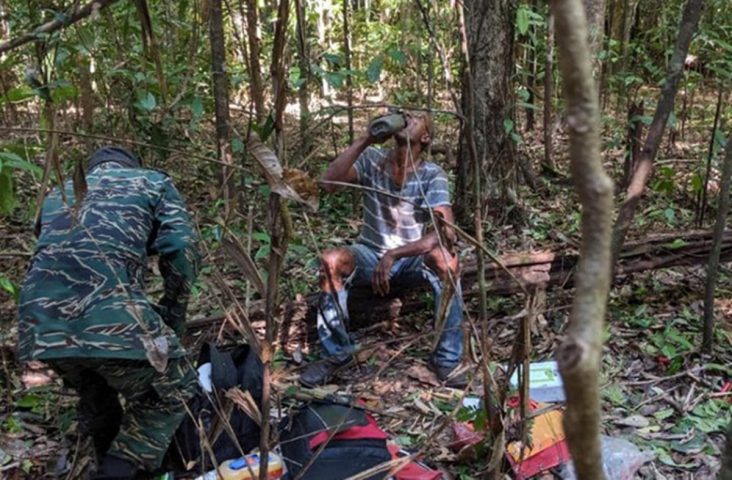 A local aircraft pilot, whose aircraft crashed shortly after take-off at Aricheng in the Cuyuni/Mazaruni on Thursday morning, has survived the accident.

The aircraft, bearing registration 8R-HAI- was piloted by Captain Bernard Singh, the Guyana Civil Aviation Authority (GCAA) stated in a release. The plane went down around 07:53hrs on Thursday in dense jungle.

Singh survived the crash and a search and rescue operation ventured into the area to ferry him to the city for medical attention. The GCAA said that the pilot only suffered minor injuries and the man was able to trek to the Aricheng Aerodrome with the search and rescue team.

The aircraft, which is owned by Domestic Aviation, was destined for Ekereku Top at the time. It was shuttling fuel between the two locations.

According to the GCAA, Air Traffic Services at Timehri confirmed that an emergency locator signal was received from Search and Rescue Satellite Aided Tracking (SARSAT).

The location was confirmed to be 2.71 Nautical Mile Northwest of the Aricheng Aerodrome. The GCAA immediately launched an investigation into the incident. This is the second plane crash that Singh has survived.

In March 2014, the pilot, who is known around the capital city for rolling along the streets on roller-blades with his friends, was behind the controls of another Piper-model aircraft when it crashed after take-off from the Arau Aerodrome, also in Region Seven.

Two other persons survived that crash. The other survivors, who were employed by Singh at his mining operations in the area, had taken the matter to the courts and were awarded judgment following the accident.

Thursday’s crash was also another blow to Domestic Aviation, which has been recovering from another plane crash that occurred in February this year.

That crash claimed the life of a young pilot, Randy Liverpool, who died while attempting to land a Cessna 206 at Eteringbang near the Venezuelan border. The company’s owner, Orlando Charles, was placed before the courts for matters relevant to that plane crash.