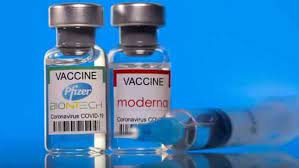 According to a study published on Monday, both the Pfizer-BioNTech and Moderna vaccinations are likely to provide long-lasting protection against Covid-19, implying that those who have already been inoculated with one of the mRNA vaccines may not need a booster dose for years.

According to a peer-reviewed study published in the science journal Nature, scientists discovered that the immunizations triggered a powerful immune response that might protect against Covid-19 for years.

The research backs up a previous discovery from May, which found that those who had recovered from infection and been fully injected with one of the mRNA vaccines have a greater immune response.

The vaccines also produced large amounts of neutralizing antibodies that were effective against three coronavirus variants, including the Beta form, which has been proven to impair vaccine effectiveness.

The germinal centers in the lymph nodes, which successfully train the body’s immune cells to protect against future infection, were still there nearly four months after the first dosage of either vaccination.

According to the researchers, this is a very good sign because germinal centers usually peak one or two weeks after immunization and then start to diminish, according to the New York Times.

More effective protection against the virus and any variants that may evolve will result from producing a larger spectrum of immune cells and longer training times for those cells.

The scope of the study was limited just to two Moderna, and Pfizer-BioNTech approved mRNA vaccines. The Johnson & Johnson single-dose vaccine was not examined. An author of the study told the New York Times that the immune response from the shot would be less durable. The study also sheds no light on the efficacy of the coronavirus vaccine against the delta variant that is more transmissible than other variants.