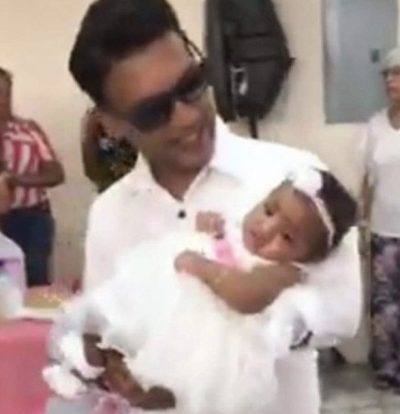 Princes town MP Barry Padarath now has his very own princess. The Member of Parliament welcomed his baby daughter yesterday with a celebration at his Roystonia home. The babygirl’s name is Sejal Padarath.

A source close to the family and speaking under the condition of anonymity said the babygirl was born by surrogate. She also said a legal arrangement was made between the child’s mother and Padarath which includes a strict confidential clause. Padarath is believed to have full custody of his daughter. Padarath declined comment on whether or not his daughter was born through a surrogate.

Se­jal Lara Padarath was officially introduced to her family in a celebration that included tassa , music and food and drinks. The traditional Hindu celebration is called ‘Barahee’which officially welcomed a child, was held yesterday. During the celebration the new father cut a cake and danced with his daughter in his arms.

The MP insisted on privacy for his child and said he did not want her brought up in the spotlight.

He has been a long standing advocate for children’s rights and protection.