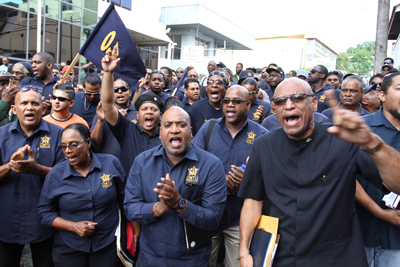 The Oilfield Workers Trade Union is moving forward with plans for a protest on September 1st despite the State of Emergency being extended until the end of November.

The Union’s Chief Education & Research Officer, Ozzi Warwick, told Power 102 Digital this morning that the protest was originally dubbed “Freedom Day” as the SoE was expected to end this month.

He said as such, the union had made plans to engage in protest action and had written the Police Commissioner for permission for the protest.

Warwick noted that the union is yet to receive a response from the Acting Police Commissioner Gary Griffith and until the request is denied, the union is moving forward with its plans.

He also agreed with sentiments expressed by the Opposition and the business community that the health measures required to control the pandemic can be implemented via the Public Health Act.

Warwick claimed suggested that the State of Emergency has been enforced to stiffle expressions of public discontent with the policies being implemented by the Government.