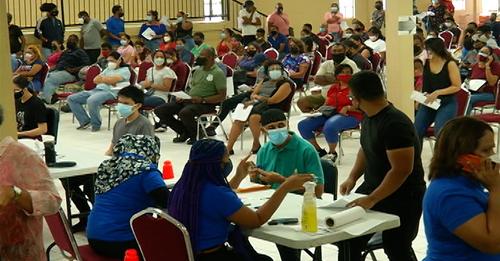 A number of vaccination sites in the Southland reportedly ran out of the Pfizer vaccines on Saturday, due to overwhelming demand.

Several of the South West Regional Health Authority (SWRHA) vaccination sites were over-subscribed, leading many at some smaller sites to be turned away without receiving the jab.

This follows the Prime Minister’s announcement that 50,000 doses of Pfizer would be available for the general public.
Thousands showed up early at the various locations in order to be among the 25,000 recipients of the Pfizer.

One report stated that small sites like the Pleasantville MIC Centre and Esperance Regional Complex ran out of vaccines shortly after lunch, leaving a larger crowd to gather at Gulf City Mall where the roll out began around 1 pm.

The Newsday reported that the Attorney General Faris Al-Rawi, the MP for San Fernando West where Gulf City is located, had to request a further 30 volunteers to register the crowd in the auditorium and vaccinate people in a separate area.

He told the media that the tents were filled at the time of his arrival to the site at 7.30 am.

There were also reported that police had to quell disturbances as people from as far as St Joseph, Cedros, Barrackpore, Princes Town, crowded the space to get their first jab.

President of the San Fernando Greater Chamber Kiran Singh said “Certainly Government did not cater for the large number of citizens who want the Pfizer vaccine.”

He said because of the renewed interest by the population which were skeptical of the other vaccines being offered, he hopes the Ministry of Health and the South West Regional Health Authority would use the next few days to facilitate the remaining citizens and immigrants who are desirous of getting inoculated.

There are two more days to administer the Pfizer vaccines at Gulf City – on September 10 and 11 from 1 to 6 pm each day and Al-Rawi promised an improvement to the arrangement.

There was also rush for the Pfizer COVID-19 vaccine at the Centre Pointe Mall in Chaguanas.

The President of the Supermarket Association of Trinidad and Tobago, Rajiv Diptee, estimated that almost 2,000 people showed up at that site on Saturday.