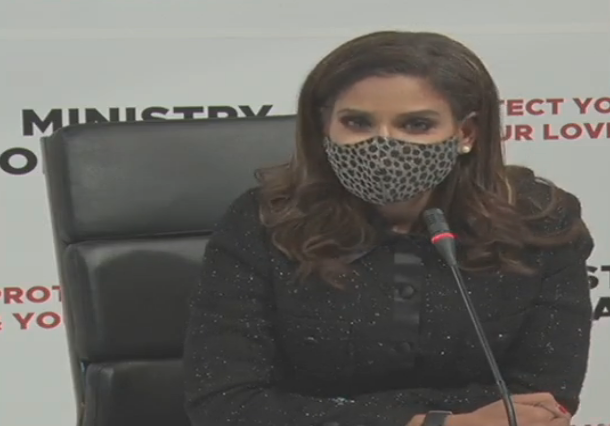 Principal Medical Officer, Institutions, Dr Maryam Abdool-Richards has confirmed that there is an outbreak of COVID19 at the St Ann’s Psychiatric Hospital.

During Monday’s Ministry of Health media briefing, she revealed that there are currently 20 confirmed cases at the facility.

Abdool-Richards said “Those patients are being isolated and managed in a similar manner to persons who are receiving treatment for example at the Couva Medical and multi training facility. If they deteriorate and require a higher level of care then the normal Ministry of Health protocols will be applied.”

In the meantime, she said the daily rolling average has increased again and now stands at 414.

Abdool-Richards said “It’s important to note this increasing trend. The number of confirmed cases that require admission in a hospital is in the vicinity of 18 per 100, while we have a discharge rate of seven per one hundred.”

“This means that every 100 cases that have been confirmed, 11 persons are required to go to a hospital and stay there. That means on average we are seeing an approximate number of 40 additional patients per day,” Abdool-Richards said.

The HDU’s are at maximum capacity and Abdool-Richards said that while they continue to try to convert beds and add staff, the resources have “started to run out”.

Abdool-Richards said the Caura Hospital is at 86 per cent occupancy and the Augustus Long Hospital stood at 92 per cent capacity. The Arima General Hospital was 77 per cent occupied, the St Ann’s facility is at 100 per cent, while the Couva Medical facility, which houses the most critically ill patients is currently at 70 per cent.

Loading...
Newer Post
Charles wants TT to be first in line for US vaccine offer
Older Post
COP – Homeless will not be arrested for any breach of curfew

AG sees nothing wrong with OPM hiring his wife’s firm; UNC says it is 0