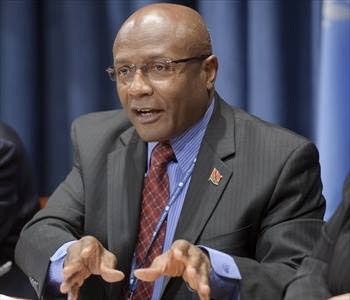 Naparima MP Rodney Charles is seeking to know the whereabouts of the Ambassador to China at this critical time.

In a release to media, Charles calls on the Rowley administration to advise whether our Ambassador to China is at post in Beijing to deal with the critical issues of sourcing vaccines and ensuring that we get value for money from our growing Chinese loans/debt.

He said “Government has claimed to be in negotiations with China on a range of issues, especially Covid vaccine producers, why is our Ambassador not in Beijing to be on top of every aspect of this important bilateral relationship?”

Charles said “If anyone needs recalling it should have been our Ambassador to India who dropped the ball significantly, resulting in us being last in the CARICOM line for AstraZeneca vaccines from New Delhi.”

“Instead they blamed the Indian High Commissioner, whose primary job is to protect India’s interest in TT, not our interests in New Delhi.
Our disastrous Foreign Affairs Ministry’s performance was on full display two days ago when Dr Rowley, as CARICOM chairman, was diplomatically snubbed, not for the first time, by being left out of a major hemispheric summit.”

“Instead Antigua and Barbuda’s Gaston Browne and Jamaica’s Andrew Holness were invited as CARICOM representatives to the ‘Leaders Virtual Summit on Climate’ taking place at the White House on April 22nd and 23rd. ”

“In 2018, former US Secretary of State Rex Tillerson, in the Donald Trump Administration, convened a meeting with regional leaders; Dr Rowley was notably not seated at the table. In diplomacy if you are not seated at the table, you may very well end up on the menu.
Earlier this year, energy rich Guyana downgraded its High Commission in POS to a Consulate. Checks reveal that this was not done in other capitals.”

“At the same time regional leaders, not having faith in Rowley’s position as CARICOM chair, were encouraged to individually write to President Biden for access to the 30 million surplus AstraZeneca doses – 2.5 million of which were loaned to Canada and 1.2 million to Mexico.”

The UNC is calling for a full scale review of our foreign policy that starts from scratch. He said “It must identify our national interests and single mindedly and with measurable goals, focus all our efforts on achieving them in the global arena.
Charles said “If not done soon, we may end up diplomatically as a regional pariah.”