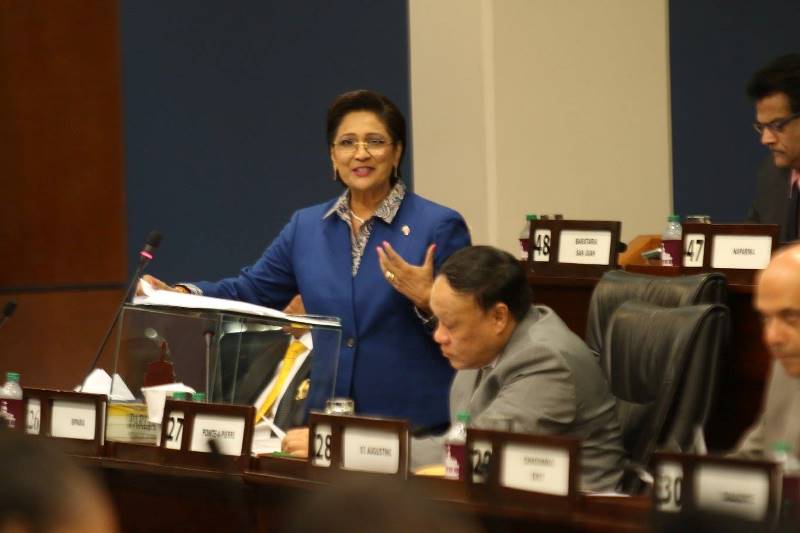 Opposition Leader, Kamla Persad-Bissessar SC in response to the Minister of Finance, Colm Imbert regarding her demands for transparency on the sale of CLICO/BAT assets, said that he hastily issued a media release to refute non-existent ghost statements .

The Minister has subsequently released a statement saying he  denies  giving “ written directions to the Central Bank to sell the traditional portfolio of insurance policies of the Colonial Life Insurance Company “.

Mrs. Kamla Persad-Bissessar said she neither or anyone else made that accusation.

In a media release sent this evening Persad-Bissessar said that it was the Minister of Finance himself who in March 2019, claimed that he was reviewing the recommendations by the Central Bank for the sale of the portfolios.

She further said “The Minister said that he was no rubber stamp and he was careful about what he does.

This means that the Minister had deep consideration and involvement in this sale.

As such, she is calling on the Minister to reveal the extent of his involvement and the directions he gave for the sale of the portfolios.

She is also calling on the Minister to answer publicly what matters he considered before he approved the sale of these billion-dollar portfolios as well as the factors he took into account when he said he protected the public interest.”

She continued to write that she finds it noteworthy that in his statement the Minister did not try to deny that the Central Bank’s preferred bidder, Sagicor offered a quarter of a billion dollars less than Maritime.

Persad-Bissessar wrote that she is again calling on the Minister of Finance to divulge the extent of his role and directions in the sale of the assets of CLICO/Bat. If there is nothing to hide then there is no reason to avoid the question.

Gunman scared off as victim throws a glass bottle

Rowley to remain in LA for medical tests

Gunman scared off as victim throws a glass bottle

Rowley to remain in LA for medical tests 0

Verzuz’ to Return With T.I. vs. Jeezy Battle 0