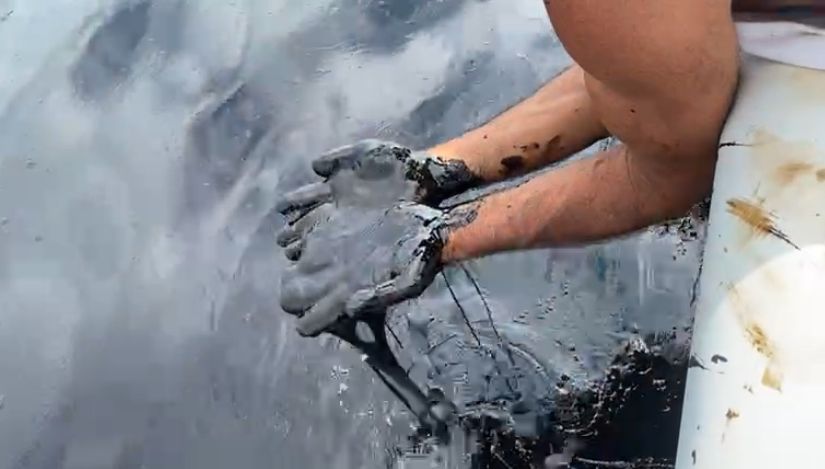 Clean-up operations are said to be continuing along the Pointe-a-Pierre harbour after an oil sheen was spotted on Saturday night.

Gary Aboud of Fishermen and Friends of the Sea, has expressed concern about the oil in the sea and its impact on the fisheries sector, as it extends from the vicinity of the Point a Pierre refinery all the way to Claxton Bay.

Paria Fuel Trading Company Ltd (Paria), in a release, said at approximately 7.30 p.m. on Saturday, August 7th, its Marine Security observed the oil sheen and personnel were immediately dispatched to locate the source of the leak.

Paria said “Absorbent booms have been strategically placed to prevent further migration of oil into the sea. Vacuum trucks are being utilised to remove oil collected on land and oil streaks continue to be mechanically broken up at sea.”

The Ministry of Energy and Energy Industries and the Paria leadership team visited the sites at 2 pm on Sunday, and the other regulatory authorities have been notified of the incident as is procedure.

“Paria continues to monitor the situation at sea and on land and the incident command team is monitoring and addressing all aspects of this incident. A comprehensive investigation will be undertaken to determine the root cause of the spill.”

Aboud claims that the authorities were not responding adequately, as their vessels were only ‘chopping up’ the oil instead of collecting it from the sea.

The Environmental Management Authority (EMA) also said it was investigating reports of the oil spill. In a statement, the EMA said it was contacted by Paria and advised of streaks of oil in the Guaracara River resulting from a leaking line that caused crude oil to enter the river.

The EMA said Paria’s report indicated that containment measures were taken to mitigate the spill.

“The EMA has been advised that mostly a sheen was observed in the Gulf of Paria and vessels were used to mechanically break up the sheen. Paria Fuel Trading is still establishing the volume of oil spilled.”

It said its emergency response and investigating unit was liaising with the Ministry of Energy and Energy Industries (MEEI) and will continue to coordinate with all relevant agencies and stakeholders investigating this report.

MP for Pointe-a-Pierre David Lee also called for urgent answers from the Ministry of Energy on the spill.

“Failure to act can have catastrophic effects not only on the surrounding environment but also on the fishing industry of the Claxton Bay Community which utilises this area as a vital source of income and food supply.”

WATCH: FFOS’ Gary Aboud was out in the water to get a first hand look at the spill.