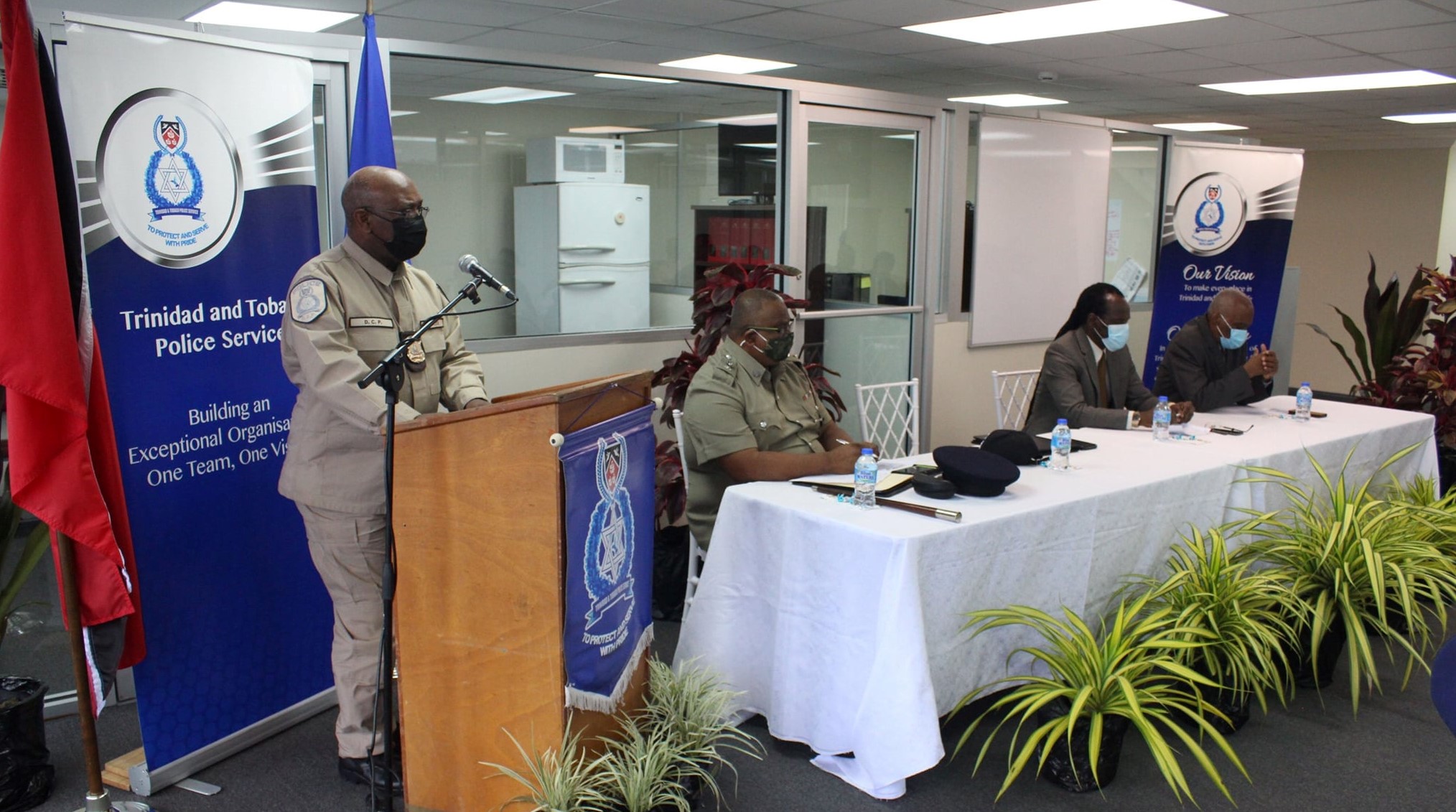 The North Eastern Division launched its Christmas Anti-Crime initiative on Friday.
The move is in response to the concerns of residents and businesses in the area due to the recent escalation in crime. The strategy involved reinforces the Division’s philosophy of ‘police presence and visibility as a deterrent to crime’.

The event took place at the Ibis Building in El Socorro on the compound that houses the Highway and Traffic Patrol Branch of the Trinidad and Tobago Police Service (TTPS). Present at the event was The Honourable Fitzgerald Hinds MP, Minister of National Security, Deputy Commissioner of Police (DCP) McDonald Jacob, Chairman of the San Juan/Laventille Regional Corporation, Mr. Anthony Roberts, Snr Supt of the North Eastern Division, Winston Maharaj, and various strategic partners. It was chaired by Supt of the North Eastern Division, Mr. Intab Ramjohn.

Snr Supt Maharaj made no excuses in his Welcome Remarks, acknowledging there were shortfalls in the policing of the Division. However, he expressed confidence that these could be overcome with the combined resources of the TTPS, Transit and Municipal Police, Traffic Wardens, and private security personnel. It will involve both mobile and foot patrols throughout the area with the intent of having a uniformed presence as a deterrent to crime, especially crimes of opportunity. It is also hoped that the efforts will address traffic congestion in the area. He also stressed the importance of proper monitoring and evaluation of the initiative so that corrective measures could be implemented for improvement.

The strategy was fully endorsed by Mr. Roberts who was happy to continue the successful relationship established between the TTPS and municipal officers. In concurring with the philosophy of a greater police presence, he also mentioned plans to build a two-storey municipal police station in the heart of the Croisee. He further pledged his support for this and future initiatives as he commended Snr Supt Maharaj for his awareness and understanding of the communities in which he operates. He was certain this would help to effectively dispense law and order in the area.

It was a sentiment echoed by DCP Jacob, who indicated it was incumbent upon all Divisional Heads to understand their districts and implement similar plans to fight crime. He said it was also a great opportunity to introduce Active Directed Patrol, an economic model of crime-fighting involving the zoning of both mobile and foot patrols. He also revealed plans that the repurposing of the Barataria Police Station would encompass the operational centre that is currently located at the Santa Cruz Police Station and would include the use of CCTV footage. Emergency Response Patrol (ERP) will also operate out of this new location. It would allow greater coordination of all operational functions from a central location. He pledged the full commitment of the TTPS executive and congratulated the Division on the initiative.

Minister Hinds also commended the Division’s impressive effort. He reiterated the importance of having a police presence in communities. It not only creates a physical deterrent for criminals but a psychological one as well. He said it provides the perfect opportunity for police to prepare for all eventualities. He expressed confidence that members of the Service can do what is required of them and urged them to let the communities they serve benefit from their extensive capabilities. He reminded all involved of the four elements of professionalism, teamwork, technology, and human compassion required to achieve their goals. He indicated that the Ministry stands ready to provide officers with the resources to be successful, including access to training whether local, regional, or international.

The event was closed by ACP Joey Samaroo who gave the Vote of Thanks.