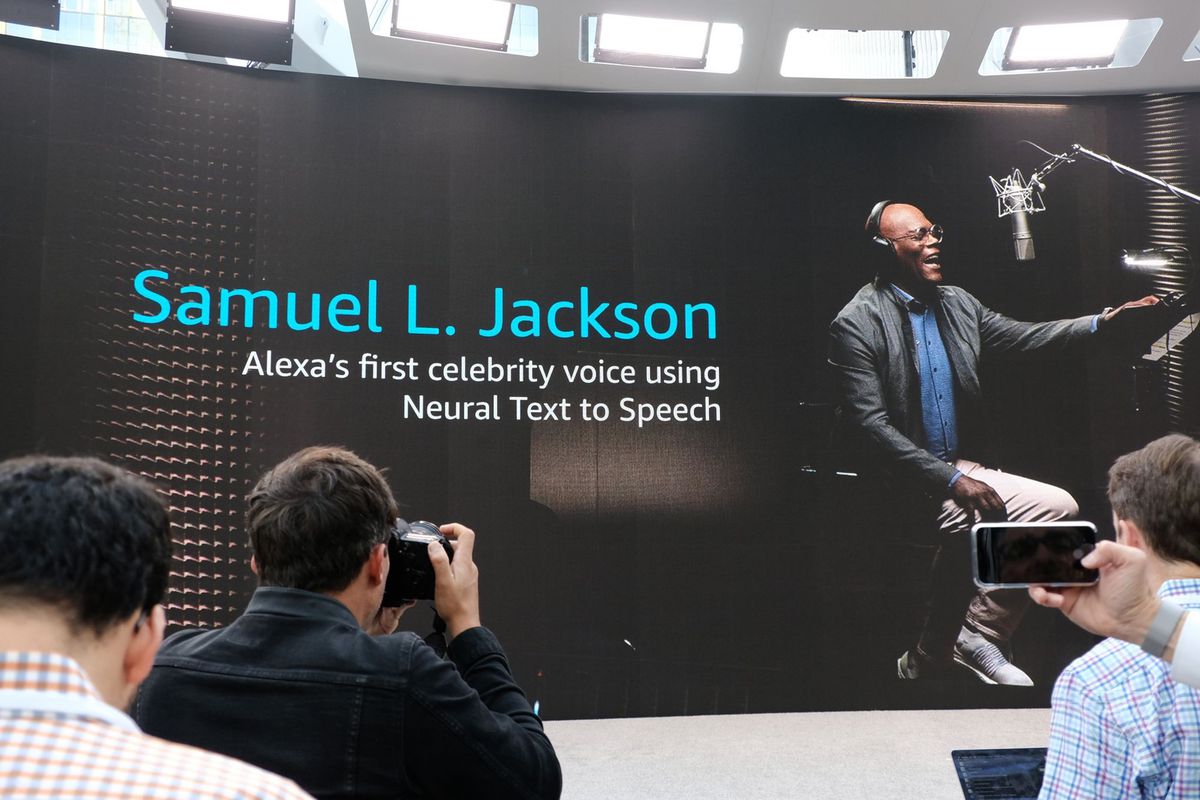 No Beyonce Here: Amazon Alexa gets Samuel L Jackson and other Celebrity Voices

The new voice is based on neural text-to-speech software that relies on deep learning techniques to make Alexa sound more like a real human being (the same approach that Apple took with Siri’s new voice earlier this year on iOS 13).

That neural text-to-speech mode also allows Amazon to mimic real human voices, like celebrities, which Amazon will be offering as alternative Alexa voices this year, starting with Samuel L. Jackson. And thanks to the new tech, unlike other celebrity voice integrations on Alexa, the new version isn’t relying on prerecorded phrases. Amazon will offer both explicit and clean versions of Jackson’s voice, and launch later this year for a “special price” of $0.99US for anyone who purchases it in 2019 (after which it’ll cost $4.99US). Amazon is also promising that more celebrities will arrive next year, too.

There’s also a new multilingual mode, designed for bilingual households to allow customers to talk to Alexa in either language they use. It’ll start rolling out in the US with Spanish and English, in Canada with French and English, and India with Hindi and English next month.

Also coming is a new “frustration detection” feature that’s designed to detect when you’re getting frustrated with Alexa getting your requests wrong, after which it’ll try to apologize. The feature is rolling out next year starting with music requests and will make its way to other Alexa interactions over time.

Last year’s “Alexa Hunches” are also getting expanded, Alexa can now try to tell you if it thinks something is wrong with a smart home device, like if a lock is low on batteries or a printer low on ink. Amazon will also start suggesting Alexa routines through Hunches based on actions you do repeatedly, like setting your alarm and asking for the weather every morning. Alexa Guard’s security features will also work in routines.

Amazon also announced a new Alexa Communications for Kids mode, which will let children talk to each other through Alexa. It’s a specifically whitelisted service: parents have to turn it on, and explicitly whitelist who kids can talk to. Parents on both ends have to agree, at which point the kids will be able to communicate.

There’s also a new Alexa Education Skill API that will allow for school software like Canvas and Coursera to integrate with Amazon (the company’s ideal scenario is that parents will be able to ask about their children’s grades or homework without having to go through a stubborn teenager, which, sure).

Also new: an Alexa Guest Connect feature, which allows for guests in your home (or say, renting an Airbnb) to connect to your Alexa with their own Amazon account, so it can access their Alexa content (like their music or shopping lists).

Additionally, Amazon is adding some new privacy commands to Alexa. Alexa already offers “Alexa, delete what I just said,” and “Delete everything I said today” commands, and starting today, customers will also be able to opt into ongoing, rolling deletion for recordings in three- and 18-month intervals.

The timetable for these releases are extremely varied: some, like the new Alexa voice, will be available today, while others like broader changes to make Alexa “more emotive and expressive” are set to release over the “coming months and years.”