Nike explores Jamaican music with the release of it’s new reggae-themed Nike Air Max 270. The sneakers are part of a five-part line by the sportswear brand that honours reggae, electronic dance, heavy metal, punk rock, and hip hop music genres. The Air Max 270 is being hailed by the company as a sneaker for casual wear, but with all the durability of a sports performance shoe. 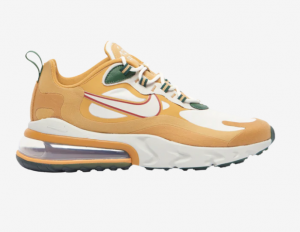 The new reggae-inspired sneakers feature earthy tones of green, tan and white and will retail for $150US. Nike has been active in Jamaica for several years. They’re a major sponsor of the Portmore United E.D. and Tivoli Gardens F.C. football teams. It’s part of the company’s philosophy of embracing humanitarian issues through change and of local cultures. 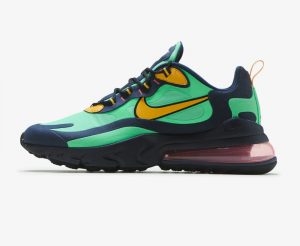 Nike has issued a variety of footwear and garments that pay homage to Jamaica. In the past, the company issued a classic Nike Air that sports the colours of the Jamaican flag. The company introduced the Hurley Jamaica Jacket, and its Beautiful X was released in celebration of the accomplishments of Elaine Thompson, the first Jamaican to ever win the 100-meter and 200-meter sprints and the first woman to do so since 1988.

The colours of the other shoes in the company’s new line include black on black for hip hop that represents the activism, love and rage required for change. The sneaker representing heavy metal features a metallic Nike Swoosh against shades of deep blue, black and purple, along with a splash of green.

The shoe in honor of punk rock features clean and classic contrasts of black and white. The most colourful shoe in the new line is for electronic dance music, represented by hues of red, crimson and pink designed to represent the thrill and vibe of the EDM scene.

Nike was launched in 1964 and quickly became one of the most popular sportswear companies in the world with lines of athletic shoes, sports equipment and apparel and sales of $39.1 billion as of Oct. 2019.